In 2008, we published our “Heal Your Home” issue on avoiding toxins and the case for precaution, which went on to become one of our most popular issues. In the following decade, the main chemicals likely to be lurking in your home are still there—and not just because you haven’t renovated.

In an ideal world, we would not be reporting on home-polluting chemicals in 2019. But as we know all too well in the environmental and social justice movements we work with, change can be maddeningly slow.

In 2019, indoor air remains more toxic than outdoor air “even in the largest and most industrialized cities” according to the Environmental Protection Agency. This is because toxic chemicals  remain ubiquitous in building materials, products, foods we buy every day, and dust that lingers in our homes. We can see this play out in the aftermath of the Camp Fire in California, where toxic ash from burned possessions and buildings is keeping residents from being able to safely camp on their own properties.

But outside, things aren’t always pretty either. City dwellers are likely to be affected by pollution from busy streets, gas stations, airports, and train stations that contribute to disproportionate breathing, heart, and brain issues for urban families, according to the Health Effects Institute.

As always, folks with less money are affected the most and are least likely to afford to “buy change” by swapping out more toxic items or moving to less polluted neighborhoods. Public housing residents are more likely to be afflicted with asthma and other health conditions because of exposure to mold, toxic flame retardants, and other chemicals. Communities of color are more likely to live near and breathe pollution from nearby coal plants, mines, and factories.

Safer Chemicals, Healthy Families’ “Mind the Store” scorecard ranks chemicals policies for 400 major retailers that sell furniture, products, and food. Nearly half of retailers ranked failed to adopt any policies to ensure chemical safety of their products in the three years the scorecard has been produced.

There are always reasons to hope and inspiration to keep pushing, however. Mind the Store has reported major progress from some leaders (including Apple, Target, Walmart, and Ikea) and 72 percent of companies evaluated for the past two years have improved their scores.

In the past decade, activists have pushed legislators in the right direction. Despite strong opposition from the chemicals industry, communities have made progress, says Ivy Sager-Rosenthal of the nonprofit Toxic-Free Future.

“Science has advanced so we know more about chemicals, especially toxic flame retardants, nonstick PFAs chemicals, and phthalates,” Sager-Rosenthal says. “On the policy front, there are a lot of states stepping up and taking the lead to regulate chemicals more thoroughly than we’ve ever done before.”

While we can make changes to our homes and lifestyle to limit toxicants, it’s impossible to buy our way to a truly safe home. For that reason, we must continue to put pressure on companies and lawmakers until dirty chemicals are eliminated from the marketplace.

You Home, Detoxed: Green American Feature
13 Toxic Chemicals Lurking in Your Home
The Room-by-Room Home Detox Guide
Planting Seeds for Clean Air
6 Simple Steps to a Safer Home
Turning Crisis into Creation with Green Affordable Housing
Swap Out Toxics to Green Your Home
Reduce, Reuse, Reimagine...and Then Recycle
Ready Your Finances for a Climate Disaster
Learn about our sponsor. 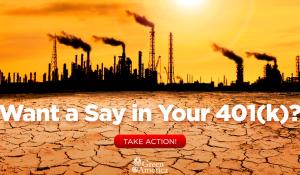