The American appetite for sugar ensures that the US ranks not only among the top ten sugar-producing countries in the world, but also takes the top spot as the world’s largest importer of sugar. With nearly 3.3 million metric tons of sugar entering the US in fiscal year 2011–2012, Americans can find sugar originating from 40 countries around the world on their store shelves.

Unfortunately, the sugar industry can’t guarantee that those cheap bags of sugar don’t come at a terribly high cost to communities and workers at the beginning of the supply chain.

For example, in 2012, the US Dept. of Labor began investigating allegations of forced and trafficked labor on Dominican sugar plantations. Also in 2012, Human Rights Watch reported on Ethiopian state-run sugar plantations forcibly displacing indigenous pastoral communities. And in 2011, the US State Department’s Trafficking in Persons Report recorded more than 25,000 instances of workers in Brazil sold into trabalho escravo (the Brazilian legal term for “slave labor”), including on sugar plantations.

But what about the more than 7.7 million metric tons of sugar produced each year within the United States? The US sugar industry has its own problems. Starting in 2008, biotech superpower Monsanto began to dominate the US sugar beet market with beets genetically modified (GM) to withstand its Roundup herbicide.

Today, Monsanto’s GM beets account for at least 95 percent the US crop, from which most of our domestic sugar supply is made. Unless a bag of US-grown sugar specifies “cane sugar” (or is certified organic), it’s most likely made from GM sugar beets.

There’s another way to find sugar that is always GMO-free, often organic, and that ensures fair treatment of workers—look for Fair Trade cane sugar. 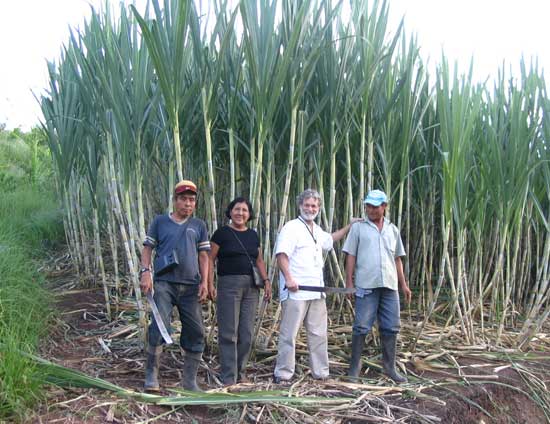 A Fair Deal for Workers
Three years ago, when Mathieu Senard, co-founder of San Francisco-based
Alter-Eco Fair Trade, visited the sugar cane farmers of on the island of Negros in the Philippines, he felt like he was visiting family.

“They’ve been selling with us for more than 13 years,” says Senard. “So, we arrive, the whole village comes out, and we share a dinner together where we give thanks to each other for this trading relationship.”

A volcanic island with a surface 80-percent covered by sugar cane, Negros is home to 27 groups of sugar farmers cooperatively organized as the Negros Organic and Fair Trade Association (NOFTA). Senard tells of meeting NOFTA member Imelda Cervantes, a life-long sugar farmer who has seen firsthand the changes Fair Trade brought to her island.

“She was telling me about her childhood, born on a sugar plantation, being woken in the middle of the night to cut cane, and working with chemicals that made her very sick,” says Senard. “But then her life was transformed by the cooperative.”

When NOFTA was founded in 1997, the island was still suffering from the collapse of world sugar prices a few years before. Sugar mills had closed, plantation owners had laid off workers, and families went hungry. Assisted by a government program that helped farmers obtain land, and by an infusion of capital from the microfinance lender Oikocredit, the farmers took matters into their own hands.

Instead of laboring to make plantation owners rich, the farmers established direct trading relationships that enabled them to keep more of their income in their communities. Today, the co-ops also control and operate their own mill. And the premium price Fair Trade provides protects them from sugar market fluctuations and helps finance community improvements.

“They’ve been able to diversify their crops, they built a community center for the village, an organic piggery, an eco-lodge for visitors to stay in, programs for the kids. The sugar is organic, so everybody is healthy,” says Senard.

According to Fair Trade USA, more than 23.7 million pounds of cane sugar was certified Fair Trade in 2011, and 81 percent of that was organic.

It Doesn't Get Sweeter Than Fair Trade

To use your sugar purchases to lift up farmer communities around the world (and enjoy artisanal, organic, and non-GMO sweeteners at the same time), check out these companies: 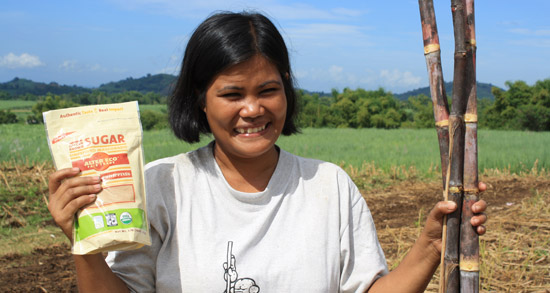 The Skinny on Alternative Sweeteners
Making Sugar Fair (and GMO-free)
FrankenSugar
9 Ingredients to Watch Out For
9 Tips to Help You Kick the Sugar Habit
Learn about our sponsor.