Ron Finley is an urban gardener and fashion designer using regenerative agriculture to increase access to healthy food and bring neighbors together in his South-Central Los Angeles community. He has traveled to Denmark, England, Greece, New Zealand, and Brazil; spoken at conferences including the American Public Gardens Association; and delivered a 2013 TED Talk that garnered 3 million views on the platform website to date—all to share the story of how starting his own urban garden planted a transformative seed in his South-Central Los Angeles neighborhood.

Recently, he starred with actress Rosario Dawson in a short video for Green America’s Climate Victory Garden effort. Produces with our ally Kiss the Ground, the video touts the benefits of starting a regenerative garden.

Regenerative community gardens, he says, can provide fresh food for communities where there’s a dearth of healthy food stores. They can bring community members together to work toward a common purpose. And they can also help cool the climate and ensure your local soil is fertile enough to feed future generations.

Community gardens, he says, are “about sharing and realizing that there’s enough for everybody. This is about feeding communities, cities, and each other and realizing there’s so much we can do collectively.”

In 2010, long before he was the quintessential “Gangsta Gardener,” as he calls himself, Finley was just trying to maintain his yard while regrouping from the Great Recession of ’08 and ’09.

Tired of traveling 40 minutes outside his South-Central neighborhood to get fresh produce, Finley decided to plant on his own land. After taking a University of California Cooperative Extension gardening class at L.A.’s Natural History Museum, Finley began gardening on his parkway—a 10-foot by 150-foot-long strip of land between the sidewalk in front of his home and the street that most passersby didn’t pay much attention to.

While Los Angeles residents have the responsibility of maintaining their parkways along with their yards, the City of Los Angeles owns them, and Finley’s food forest was a bit taller than the city’s 36-inch height limit for parkway plantings. So, an enforcement officer told him he would have to cut the excess vegetation or get a $400 food-planting permit.

Back in 2003, before Finley had ever envisioned an urban gardening movement, he’d planted banana trees on that same strip. A neighbor had reported him to the city, and he’d been forced to remove the banana trees. When asked why he decided to plant on the parkway again in 2010, given the ordeal he went through in 2003, Finley said, “because it was still right.”

This ordinance is why Finley calls L.A. and other cities “food prisons,” as he does in the 2015 documentary Can You Dig This: “You can grow things in a desert. In a prison, you need permission to do everything. That’s why growing food in the city is so defiant, because you’re disrupting a system in place.”

In round two of his battle against the City of Los Angeles, Finley decided not to cut down the food forest, and he solicited the support of 900 petition signatories to fight L.A.’s parkway ordinance. Finley found allies in Steve Lopez, a Los Angeles Times writer who documented these events in his regular column, and Councilman Herb Wesson, who argued alongside Finley that South-Central L.A. is vegetable-poor and that Finley’s garden brought much-needed access.

Though it took Finley an arrest warrant, two court dates, and a public hearing, all over the span of two-and-a-half years, the city overturned the ordinance in 2015, officially allowing L.A. residents to garden on their parkways.
Since then, Los Angeles has developed plans to grow more urban farms and marketplaces to increase food access, which is exciting, but the question remains: Why is it still so difficult to get fresh, organic produce in South-Central Los Angeles anyway?

A Paradise within a Desert

South-Central Los Angeles is a food desert: a geographic location where access to healthy food options are extremely limited or nonexistent. There are currently 23.5 million people living in food deserts in the US. And cities with high African American and Latin American populations, including Atlanta, Chicago, Detroit, New Orleans, and New York City, regularly top the list of those hit hardest by food scarcity.

South-Central L.A. has higher obesity rates than more affluent neighboring communities like Beverly Hills, Glendale, and Pasadena, which are only a few miles to its north, according to a 2011 study conducted by the Los Angeles County Department of Public Health. 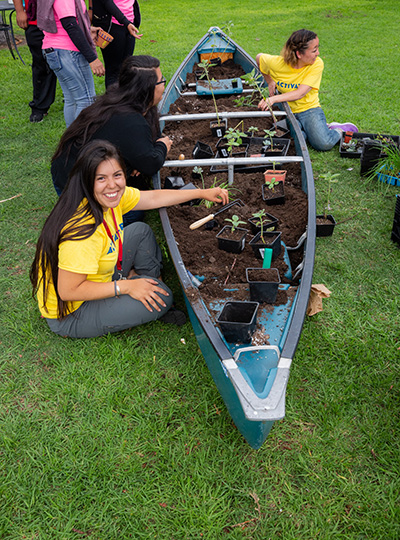 L.A. residents get their hands dirty at DaFunction, a community event held by the Ron Finley Project to celebrate urban gardening. Photo by Jim Newberry.

There may not be a definitive answer for the stark difference in food access between South-Central L.A. and its neighbors, but studies like one conducted by the Associated Press found that out of 2,434 US grocery stores that opened between 2011 and 2015, only 250 of those stores opened in food deserts. So South-Central L.A., like other cities across the country, has likely been overlooked by supermarket developers that anticipate lackluster profits from low-income communities.

What isn’t hard to find in South L.A. is a surplus of fast food restaurants, liquor stores, and vacant lots, which Finley says are part of a larger design he talks about often. His work, he says, aims to give people the tools to turn food deserts into good food oases.

“This work isn’t just about the garden or food; it’s about freedom, and beyond that, it’s about people,” he says. “I want to show people how to be free from the designed paradigm in which they think this is the only way they can live.”

Following his success overturning the gardening ordinance, Finley turned to his life’s work: teaching people organic urban-gardening basics to create a source of fresh food for their community. In 2012, he launched the Ron Finley Project—a nonprofit combining education, business, and community bonding to nurture the people of South L.A. through regenerative, organic urban gardens.

“HQ,” short for the headquarters of the operation, is also the Ron Finley Project’s flagship garden, which is located on Exposition Boulevard and is adjacent to Finley’s own home. Taking up about 150 feet, HQ is lush with numerous fruits, veggies, and herbs including, lettuce, broccoli, eggplants, potatoes, collard greens, tomatoes, pears, bananas, basil, sage, and mustard, to name a few. Ten-foot tall sunflowers and graffiti murals collaborate in creating a soulful neighborhood paradise.

At HQ, Finley and the Ron Finley Project staff lead gardening classes for the adults and kids he’s recruited from the neighborhood. 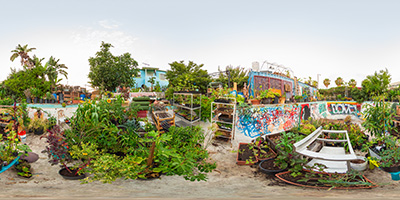 A panoramic view of the Ron Finley Project headquarters. Photo by Jim Newberry.

In addition to regenerating the area, Finley and HQ’s gardeners are also regenerating the soil. In his gardening practice, Finley abstains from pesticides and fungicides, and keeps soil covered with plants, which helps improve water infiltration. He also embraces hügelkultur-styled raised soil beds, in which mounds of logs, branches, and compost are topped with soil. As the wooden materials decay, they provide nutrients to that soil and greater aeration over time.

Finley says he’s grateful to participate in a larger ecosystem as a gardener and has witnessed bees, butterflies, and hummingbirds return to his neighborhood. Though regenerative agriculture may be a fairly new term, Finley says he’s been doing it all along but calling it “biomimicry.”

“The forest does regenerative agriculture by itself. So what I’ve done is replicate the forest by doing biomimicry,” says Finley, meaning that he tries to mimic natural growing cycles in his gardens. For Finley, regenerative gardening starts and ends at the soil. For example, he’s devoted to composting—the process of taking plant material like trimmings, grass, old plants, twigs, leaves, and food scraps and allowing them to decompose.
“One of the things I learned gardening and working with compost is that we’re carbon, and we’re part of the soil,” he continues. “If you look at compost, a collection of things that were supposedly dead, and then see the heat produced from it, it makes you question where the heat comes from. It shows that we’re energy, and energy never dies; it just transforms, and gardening makes you understand that.”

Finley says he has no idea how many gardens he’s helped plant, and though it would be nice to know, he isn’t concerned with numbers. What he says is most rewarding is seeing how far his message has traveled and inspired people around the world.

“It’s crazy how many people have gotten into [urban gardening] after saying they’ve heard me speak,” says Finley. “I was in New Zealand recently, and Maori elders told me they’ve been following my work for years, and I was like damn. I get to see the fruit of the seed I planted in real time, and I’m honored by that. I don’t have the words to express how that makes me feel.”

Currently, Finley has plans to bring the ultimate garden experience to life by finding a larger location where he can include not just the garden but a café,  a greenhouse, and a food stand where people will be able to trade their extra produce. The Huffington Post originally reported on Finley’s plan to build a garden behind one of L.A.’s Carnegie Libraries in 2014, but he says government bureaucracy is halting the process, so he’s exploring private funding options.

And he continues to encourage people across the US to embrace regenerative “biomimicry” techniques in their gardens.

“We have communities nationwide that are food prisons that could be producing their own organic food while addressing climate change,” said Finley in the video. “By educating the public about regeneratively homegrown food, Climate Victory Gardens are raising awareness about one of the biggest global challenges of our time and showing Americans how they can make a difference for themselves, their households, and their communities. Soil equals life.”

Green America is active in addressing the climate crisis by transitioning the US electricity mix away from its heavy emphasis on coal-fired and natural gas power.