From Detroit to Baltimore, some old industrial cities are being revived by workers who are also getting a new lease on life.

When you think of American cities, what scenery comes to mind? For some, it’s towering buildings and congested traffic, while for others it may be vacant homes and slow-moving construction. Whether we’re talking about cities thriving with emerging businesses or those stagnated by economic crises, it can be easy to forget that urban spaces are homes to local communities and environments. And it matters what types of industries live there too.

For example, as a result of power plant energy production in Detroit, Michigan, the prevalence of asthma among adults was 29 percent higher in Detroit than Michigan as a whole,. The Baltimore-Washington metro area is the second most traffic congested and ozone-polluted region in the US, according to the Chesapeake Bay Foundation. Though happening in different regions in the US, these cases illustrate the interconnected need for reform—reform as radical and ambitious as the Green New Deal.

When Massachusetts Senator Ed Markey and New York’s Rep. Alexandria Ocasio-Cortez introduced legislation for the Green New Deal in February, its proposal for greenhouse gas reductions, smart energy, and green job creation was criticized for being lofty and costly. While Green America has made recommendations to strengthen the Deal, we don’t count its broad framework as negative. In fact, it represents the kind of positive radical change the global community needs to beat the climate crisis. Though skeptics may question whether the Deal’s vision is possible, the growth of the clean energy sector and the organizations leading training programs have already proven the possibility of jobs that steward the environment and promote socioeconomic mobility, and they’re gaining momentum.

Green job skeptics can also consider this: it took 40 years for the US solar market to reach its millionth installation in 2016, but in the three short years since, its already installed a million more. Wind power continues to break records with eight percent growth in 2018 and today, the US solar and wind industries produce enough combined energy to power 42 million homes. So far, 29 states and the District of Columbia have committed to renewable portfolio standards—programs that require utilities to source a portion of their energy they sell from renewable sources.
These statistics show that industries that barely existed 20 years ago are now driving demand for workers nationwide and this growth comes at a time when many people from under-resourced communities need well-paying jobs.

Maryland’s solar industry is expected to grow, thanks to the passage of the Clean Energy Jobs Act, which commits to 14.5 percent of the state’s power will come from solar energy by 2030. But in 2017, 87 percent of solar companies in DC, Delaware, Maryland and Virginia reported difficulty in finding skilled workers, according to a regional solar industry association.

BCSC has connected Baltimore residents with sustainable job opportunities since 2003 and includes one of Maryland’s first solar panel installation training programs. Baltimore has long faced challenges in developing strategies for crime prevention and investments in public education. The prospect for a well-paying job can make all the difference in the lives of residents, especially those resisting the gravitational pull of recidivism.
“A lot of people in Baltimore city don’t have life-sustaining jobs. The national unemployment rate for African Americans is actually down, but it’s not about being unemployed. It’s about having employment that you can’t survive on,” says Christopher Dews, the Civic Works training coordinator.

“We want to reduce incarceration rates for marginalized people by preventing them from resorting to illegal means to make money because a lot of their needs are fundamental, from housing to food to clothing, to paying for kids and transportation,” Dews says.

Through the BCSC solar training program, trainees receive a three-month course with 320 hours of the on-the-job training, as well as certifications from the North American Board of Certified Energy Practitioners and OSHA.
In Detroit, leaders are creating similar opportunities with the Detroiters Working for Environmental Justice (DWEJ) Future Build program. Founded in 1994, DWEJ distinguishes itself as the oldest environmental justice organization in Michigan and runs the Future Build program that provides trainings in solar installation, residential and commercial construction, and lead abatement. DWEJ hires its own trainees through the organization’s company, the Future Build Construction Group, and targets people who want to get out of a dead-end, low wage paying job cycles. 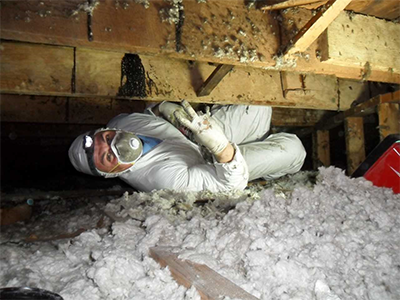 Both Baltimore and Detroit are what the Brookings Institute calls “older industrial cities”—those that have held strong manufacturing industries historically but have struggled to grow jobs in new sectors and boost incomes, especially for communities of color. Green job training programs are relevant not just for their ability to accelerate economic mobility, but to encourage inclusivity in industries where some demographics aren’t always represented.

Detroit contains five of the most polluted zip codes in the state of Michigan, and its residents pay twice as much of their household income on electricity bills than other residents throughout the state. Because of that, Detroiters have a unique stake in the city’s construction and energy production industries. In 2018, the consulting group Research and Data reported that the energy retrofitting industry is projected to grow by 12.6 percent from 2017 to 2025.

“We’ve had construction companies come here from outside Detroit to do major work to revamp commercial buildings and the hiring that’s been done isn’t reflective of the actual demographics of the city,” says Duell.
His observation reflects a larger challenge within the clean energy sector, where less than 20 percent of workers are women and less than 10 percent are African American. At DWEJ, the Future Build program is targeting those looking for living wage careers, and for Anetha Walker that journey was one of reinvention.

After working for years as an educator, at age 54, Walker connected with Operation Able, an organization helping people to re-enter the workforce and a simple flier led her to Future Build’s energy weatherization training program. Walker graduated from the program in May 2017 and has since become a trainer herself to Future Build students.

“When I teach people something that’s related to their everyday life, like how much energy their light bulb is spending, they’re so shocked and that’s the best part for me,” says Walker.

At Civic Works in Baltimore, leaders are confronting the realities of recidivism and discrimination head on, with a plethora of job-readiness services including transportation assistance, case management, resume workshops, interview preparation, and even cognitive behavioral therapy.

Instead of expecting trainees to transition immediately to full time jobs after graduation, BCSC pays for trainees to work at partnering businesses for a two-month probationary period to ensure a good fit for both the employers and employees.

“Even though graduates have the book knowledge and the hands-on experience, businesses may say they don’t have it in their budget or they don’t know the person and it may be difficult to build trust,” Dews says. “We mitigate that aspect by telling the employer that we will front the majority of the money for our trainee(s) to work there for two months.”

Since Civic Works entry level positions pay an average $14 to $18 an hour, these opportunities can be a game-changer in the lives of Baltimore residents.

“I had gone to one of the information sessions, and even then I was undecided. But I figured that I’d taken chances with so many other things, why not take this chance,” says Christian Jenkins, a Civic Works trainee in the energy weatherization program.

Jenkins learned about Civic Works through his probation office. “The staff seemed like they really had our best interest in mind. Now it’s all about putting my training to use.”

One of the projects Duell and Future Build trainees worked on was an abandoned home acquired by the interfaith anti-poverty nonprofit, Focus Hope. The building is now a candidate for LEED platinum certification and net zero energy use. Duell says that while not everything done on such a project can be incorporated into the homes of average Detroit tenants and homeowners, there are ideas that can be forwarded to help people make their homes healthier and more energy efficient. 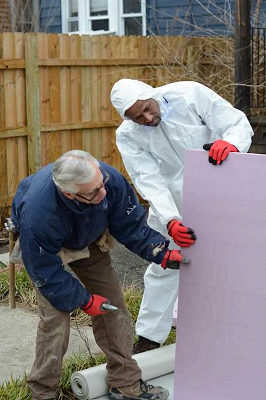 “For people in Detroit that have a low- to moderate or fixed income and live in older homes, incorporating things like air sealants can save hundreds of dollars for homes that are extremely drafty,” says Duell. He adds that installing insulation, and reducing lead exposure by getting rid of lead paint can be game-changers.

Currently, DWEJ’s Future Build program is partnering with the nonprofit YouthBuild to create cohorts that will engage in 12-14 week long trainings to rehabilitate houses, including those assigned to the city’s demolition list, so they can be re-sold to low income residents, at around $30,000 each. The work that goes into these projects include electrical wiring, plumbing, strategic insulation, high efficiency water heater installation, and painting with zero-VOC products.

Beyond cities like Detroit and Baltimore, green job training programs are continuing to gain popularity. From urban farming organizations in Columbus, Ohio, to solar installation trainings in Los Angeles, these programs make new deals with everyday Americans looking to reinvent themselves and make the prospect for a Green American Dream a little more real.

Is It Greenwashing? Or Is It A Sustainable Business?

What do all these words have in common?

They don’t mean anything! These marketing buzzwords are meant to grab your attention, but none prove the sustainability of the product or the company.