What You Gain When You Buy Nothing

When Cory Chow’s sister got married, Cory bought a bridesmaid’s dress. After the wedding, she put it in her closet, where it hung there for more than three years.

Then, someone on her local Washington, DC, “Buy Nothing” Facebook group posted in search of a formal dress in her size.

“Being able to pass it along to a neighbor who would otherwise be buying a new dress gives me the little push I needed to let it go,” Chow says.

Across the country, groups are popping up where people can participate in burgeoning low-consumption and low-waste communities. These groups are both informal and formal and can be hyperlocal or part of municipal efforts. What makes them special is that they challenge American culture’s “buy more” messaging as they help people save money and engage with neighbors.

The Zero Waste movement is not new. The idea goes across cultures over the centuries, back to the ideas of “waste not, want not,” and “use it up, wear it out, make do, or do without.”

But between the Great Depression and the beginning of the 1950s, that thinking changed in America. In 1955, Life Magazine published an article celebrating “throwaway society” which framed convenience food, paper towels, and disposable diapers as giving back time to housewives. Plastic did save people time, but now we see the societal and environmental costs of having an economy based on products that are designed to be thrown out.

All along, there have been people going against the grain to be thrifty and make do. It finally seems that those people are becoming part of the mainstream again. Many forward-thinking cities are starting to implement Zero Waste plans to encourage reducing consumption, composting, and recycling. Encouraging these ideas can save municipalities money for incineration and landfill space.

In 2013, Liesl Clark and Rebecca Rockefeller started “Buy Nothing Bainbridge” on Bainbridge Island, Washington, where they lived. Their project was founded on the principle of “give where you live” and encourages members to give freely and ask for what they need. Since 2013, Buy Nothing participants have grown to number over a million in at least 25 countries. While people may join groups as they declutter or to save money, the Project says “a gift economy’s real wealth is the people involved and the web of connections that forms to support them.”

Of course, social movements are only as strong as the people in them. Luckily, they’re everywhere.

Polly Barks cared about the planet but didn’t engage far beyond recycling in her home. She was (and still is) living in a low-income and food-insecure neighborhood in Lafayette, Indiana, and wasn’t making much money herself. Waiting for the bus one day, she couldn’t help but notice plastic trash sitting at her ankles. She realized if she wasn’t part of the solution of excess waste and litter, then she was part of the problem.

“I realized I always had the privilege of being away from trash. But I was in this neighborhood where I really had to confront it,” says Barks. “I didn’t have money and I didn’t really have connections in this new city. But the one thing I could control was my waste.”

Barks didn’t stop at curbing her own waste. She wanted to find a community to share tips, hold each other accountable, and take collective action, but realized she’d have to work at it. Her first meetup attracted only three people, but they enjoyed sharing tips and getting to know each other. Over time, she joined a Buy Nothing group, put a “Little Free Pantry” in her yard to give pantry staples and the bounty of her garden to her neighbors. Now, Barks is the co-organizer of a local climate action group. Its first goal is to get the city to instate a climate action plan.

“Zero waste as it’s often presented is insular. […] Sustainability needs to be community-oriented, but too often it isn’t,” says Barks. “What I always tell people is, ‘what is the point of you creating a mason jar of trash every year if all your neighbors are throwing out ten giant trash cans every week?’ Or, ‘what’s the point of a trash jar if your neighbors are hungry?’”

Two thousand miles away, in Lafayette, California, lives Nancy Hu, a self-identified “Zero Waste Mom.” She works as a dentist for the Department of Veterans Affairs and has accepted that hers is an inherently wasteful industry. Her spare time, though, is dedicated to creating less trash and helping others do the same.

It isn’t always easy, but it is rewarding to work with members of her community and figure out how to create less waste together. Hu got an idea from the City of Palo Alto’s Zero Waste team to put together a “zero waste party pack:” a set of reusable dishes, cups, and flatware to loan out to residents for parties. She took on the project herself and is eager to share the pack with community members, even when it means arriving early and staying late at her kids’ piano recital to collect the party pack.

“Reducing plastic waste is like a gateway drug to political action. If you can make positive steps in your own personal life, say, reducing plastic waste within your own circle of influence, you can feel pretty good,” Hu says. “You start realizing and seeing a bigger picture behind why it is you’re doing what you’re doing. Then you realize there are limitations of personal action, and that leads you to doing more in
your community and getting involved. At least, that’s has happened with me, and how I’ve seen it happen to those around me.”

Hu became the administrator of her local Buy Nothing group and hosts six TerraCycle bins in her backyard so neighbors can drop off hard-to-recycle waste, like cigarette butts and kids’ apple sauce pouches. When the bins fill up, she sends them to the company for recycling (read more about TerraCycle here). She also joined a 2018 training for climate activists put on by Al Gore’s nonprofit The Climate Reality Project, after which she got involved with her local chapter working on public comments and rallies in the Bay Area.

Putting the You in Community

Reducing demand for new items and reducing trash both have obvious benefits for the Earth and your wallet, but joining communities like these can boost your self-esteem, too. A 2012 study from Stanford psychologists showed that even small cues of social connection can boost personal motivation for shared goals (like getting a community to reduce its waste). A study from the University of North Carolina showed that positive social connections could improve your physical health as well as your mood.

Cory Chow, who finally donated her bridesmaid dress from her Buy Nothing Group, got something in return, too: a heavy-duty thermos to help reduce her use of disposable cups. She says she uses it every day.

Whether you’re giving or requesting, have something to teach about waste or a lot to learn, communities are out there. Find your local group by searching buy nothing, zero waste, or another term and your town name on Google, Facebook, or Meetup. Don’t forget to ask around on NextDoor, your local listserv, or at in-person community events, too. If you come up short, start your own group by registering with Buy Nothing or spread the word about a zero waste group on social media, local bulletin boards, and listservs. 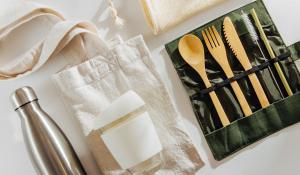 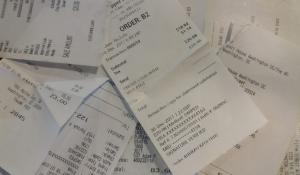 Why "Skip the Slip and decline paper receipts?