Despite dangerous critics, drag performers stand, wigs high and makeup bold, proud and resilient as Mother Earth herself. Their ties to nature run deeper still in the genre of sustainable drag.
By
Anya Crittenton

It was the 19th century and drag as we understand it today—the exaggerated performance of gender—was being defined and shaped for the first time. Of course, drag existed long before, in the days of Ancient Rome, Shakespearean theater, and Japanese kabuki.

Despite dangerous critics threatening violence at drag events, drag performers nonetheless remain, wigs high and makeup bold, proud and resilient as Mother Earth herself. For some queens and kings, their ties to nature run deeper still in sustainable drag.

You’re Born Naked and the Rest Is Drag

An Indigenous drag star, a photographer who grew up on a sustainable herb farm, a South Korean costume designer raised by activists. Their origins set the stage and the communities that followed, from drag to family and friends, shaped them.

Bohenne Arreaux is Diné (Navajo peoples) and Creole, from the Jena Band of Choctaw, and their Indigenous roots are not only a part of their drag persona, but the foundation. (Note: Bohenne Arreaux is Two-Spirit and uses all pronouns.)

“I was definitely a novelty in the beginning,” they say of being an Indigenous drag performer. “But I’m not doing my drag in a way that performs culture as much as I am sharing who I am with people.”

Cassidy DuHon, a DC-based photographer and amateur drag queen has had a deep love of nature cultivated by his parents, including his soil scientist mother, from birth.

“Our role as humans in nature is to go out and commune with larger spirits, commune with your friends through the act of removing yourself from [the distractions of] society,” he says.
Similar to Arreaux’s Indigenous community and DuHon’s parents, Hahnji (who prefers to go by their first name only) recalls their childhood in South Korea: activist elders put solar panels on the roof and visits to their thrift-loving grandmother in Michigan resulted in a return to South Korea sporting 70s lace bell bottoms from Goodwill.

Drag came from their gender identity: “I’m gender-fluid and I like to play with different silhouettes. I went through a high femme phase, with heels and skirts with petticoats, only to change into basketball shorts and a tank top when I got home. I was doing drag on the regular and didn’t know it.”

It made sense, then, to infuse their earliest lessons and values into their drag community, just as Arreaux and DuHon did.

Shangela, a drag queen who gained fame on RuPaul’s Drag Race and now co-hosts We’re Here on HBO Max, has called drag queens some of the most resourceful people. In a 2021 article in Wealthsimple, she praised how they use makeup to the very end and recycle costumes, all while relying largely on tips earned at shows—which they booked using their own talent for both entertainment and cultivating connections.

One of Arreaux’s most iconic looks was crucially made with the help of others, from friends to ancestors and creatures who lost their lives.

“I was in a competition, the theme was Monster Ball,” she recalls. “I knew there would be Frankensteins, vampires, zombies, and I wanted to do a creature from Indigenous mythology.”

Creating the costume for Deer Woman stemmed directly from their Indigenous beliefs of respecting the land and not creating waste.

“The costume was actually made from a couch,” Arreaux explains. He stripped the leather from the couch, given to him by an old roommate, and Deer Woman’s creation began.

Wanting to honor the animal which lost its life for the couch, Arreaux gave the skin new purpose while sustainably upcycling and avoiding waste. It’s a rule they follow when creating anything, from a theatre prop to a new drag character: “You have to be really wise about making something that lasts.”

Wandering, But Not Lost

In 2012, a friend invited DuHon to Beltane, the Gaelic May Day festival honoring the start of summer. His friend was a member of the Radical Faeries, a counterculture movement started by gay men in the 1970s seeking community and spirituality in nature.

“At first it was like, ‘Oh, this is this strange party in the woods.’ But then I really took to the deeper spiritual aspects of it,” DuHon says.

Everything changed for him then. He became a Radical Faerie, started the hashtag #dragofthewoods on Instagram, and began hosting his own sustainable drag events, like a queer camping trip. One of his friends made an entire ballgown and accessories from grocery bags upon realizing the bags customers return in the hopes they’ll be recycled often go straight in the trash. Another sparkled and dazzled with a flowing, golden cape made of salvaged honey packets.

“Doing drag in nature takes teamwork,” he says. “Limited electricity, no place to plug in that glue gun. You work together to craft a look from less. The woods remind us to get back to our communal nature.”

Living in this world, finding community and support can be transformative and life-giving.

Five Corporations in a Trench Coat

Hahnji sees community all around them.

It is the Mexican artist down the street in New York City they buy pieces from for a play by a Mexican American playwright, and then develop a friendship. It is the performer who wants to keep their costume made by Hahnji, giving the piece life again and again. It is the young queer people, lacking resources, who come to Hahnji for styling help.

“We live in a country of five corporations in a trench coat and they don’t want us to be a community,” they explain. “A lot of what I do is promote resources and give back.”

Hahnji’s approach to this is anti-capitalist, focusing on the green values of paying fair wages and reducing the use of non-renewable resources.

They encourage buying from BIPOC-(Black, Indigenous, People of Color)-owned businesses and re-thinking what capital can be, such as resources or education.

“Everything is super gatekept,” they explain, and doubly so for queens and kings who are members of communities of color, who are forced to fight uphill battles upon the intersection of racism and homophobia. It’s why they’re focused on aiding communities of color and gender-expansive communities, to give them the tools and aid purposely kept out of reach.

Eventually, they want to expand this sense of community even further: “A lot of these resources are focused in liberal areas like New York, but I want to take them to the Midwest and beyond.”

Drag exists everywhere, as do communities of color, queer, and marginalized people. Beyond New York City and Los Angeles, there are countless people pursuing their identity, their art, their look, dreaming of more, if only someone offered a hand.

Don’t Be a Drag, Just Be a Queen

As DuHon puts it, drag is the “great equalizer.” It is a powerful, unifying force, especially for queer people and reinforcing their community. It examines gender and privilege, and it cannot be done alone.

As drag queens and kings rely on their resourcefulness and resilience, their cheering section of friends at brunch, their mentors and ancestors, to thrive together in the face of protesters calling for their banishment, there is much to learn from them.

Sustainability in drag shows us that we can thrift clothes, make things using recycled materials from services like FABSCRAP, support small, LGBTQ+, BIPOC-owned businesses, and above all else: find community, ask for help. Green America’s Vote with Your Dollar toolkit also provides first steps to adopt a money-saving, community-building lifestyle at greenamerica.org/votewithyourdollar.

You are never alone, and you certainly can’t get that two-foot thrifted Dolly Parton wig on your head yourself. 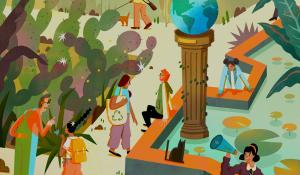 The Earth is a place of incredible resources: powerful winds, rich soils, strong currents, and resilient life. When it comes to fighting climate change or investing in a greener future, our most crucial asset may be each other.