The “Anything Vegan” nutritionist chefs
Jasmine Simon and Marji Simon Meinefeld
show us how, simply and joyfully.

Photo from Anything Vegan

Sisters Jasmine Simon and Marjorie “Marji” Simon Meinefeld are both committed vegans, and they’ve dedicated their careers to spreading the word that going vegan isn’t a sacrifice but a joyful experience that can enhance your life in many ways.

Jasmine was 15 years old when she had an “a-ha” moment about the links between her diet and her health.

“I started to look around in my community and saw a lot of people who were ill, overweight, and unhealthy,” she says. “I thought there had to be some connection between what people were eating and how they’re feeling.”

So she decided to try changing her diet to see how she felt. She switched to a vegan diet and noticed a big change: After years of suffering with acne that was so severe, she habitually hid whenever someone brought out a camera, her skin started clearing up. She says she was “all in” at that point and has been vegan ever since.

Marji’s dietary transition came later, when she was pregnant and sick on top of it. Over the years, she’d tried to follow her sister’s footsteps and switch to a vegetarian diet, but without education and vegan eating support, she kept relapsing back to eating meat.

When her doctor wanted to remove her gall bladder after her pregnancy, she turned to Jasmine, who by then had more than a decade of vegan living and dietary research under her belt.

The first thing Jasmine did was to closely examine her sister’s diet. She created an eating plan specific to gall bladder illness, encouraging Marji to embrace a plant-based lifestyle.

Two weeks later, Marji’s doctors were amazed when her ultrasound came back negative, and they declared that no surgery was needed.

She continued eating vegan, although her husband didn’t join her, so she occasionally relapsed. But then he died suddenly of heart failure. He was 42 years old.

“He was healthy and strong, or so I thought,” she says. “We ate the ‘healthy’ standard American diet, but that’s when I realized the word ‘die’ is in the word ‘diet’ for a reason. I started to look at my eating habits and lifestyle, and I decided I wanted to live.”

That’s when Marji joined her sister in going vegan for life.

After learning these facts and more, the sisters became passionate advocates of a vegan lifestyle to promote optimal health, which they say soon grew into a passion for protecting animals and the environment. And of course, it also became a passion for cooking really good food.

“We love to eat. Our mom has southern roots, and our dad is from Trinidad and Tobago,” says Marji. “We grew up around flavorful, delicious food, and we weren’t about to give that up.”

“Not at all,” adds Jasmine.

In 2010, Marji, an attorney for the US Air Force at the time, threw a dinner party for her omnivorous colleagues and enlisted Jasmine to help. The two prepared a selection of non-vegan dishes but then, as a social experiment, also prepared vegan versions of the same dishes, such as kale with turkey, and “really great kale without the turkey” beside it.

Not only did their guests love the vegan dishes, but they couldn’t believe they were made without meat or dairy.

“They asked how we did it, and we replied with one simple sentence: Anything you can make, I can make vegan,” says Jasmine. “But some of them didn’t believe that the dishes were vegan. One guy even started looking through the garbage for meat wrappers!”

That dinner party planted the seed that would eventually become Anything Vegan, Marji and Jasmine’s business, which is based both in Washington, DC, where Jasmine lives, and Germany, Marji’s home base. The two became certified plant-based nutritionists through Cornell University and now offer vegan nutrition consulting (remote and in person), vegan personal chef home-delivery services, vegan cooking classes, vegan catering, and wellness planning. They are also popular speakers, including the
Green Festivals®.

The two have a vegan cookbook Fork Diabetes; Go Vegan, and they recently launched their own brand of vegan cheese, Oh-So-Cheesy Cheese.

Their company slogan? The same thing they told their dinner party guests back in 2010: Anything you can make, I can make vegan.

One thing that might surprise people after hearing what they do for a living is that Marji and Jasmine aren’t interested in urging others to go vegan.

“We don’t recommend that people go vegan. It’s a personal choice, and telling someone they must go vegan can be met with resistance,” says Marji.

Instead, the sisters prefer to encourage people to educate themselves on the benefits of eating more plant-based foods. “Read the truth about food you’re currently eating and what it’s doing to your health—what’s in it, how it’s made, how the animals are treated, how it affects the planet. As people go through this discovery for themselves, they often self-select to transition to a plant-based lifestyle,” says Jasmine.

Once people make the decision to go vegan, the sisters are ready to help. (For a fee, you can even e-mail them 20 of your favorite recipes, and they’ll “veganize” them and send them back to you with cooking videos and a shopping list.) They offered Green America a few of their favorite tips:

Most importantly, the sisters encourage everyone to “be gentle with yourself and others.”

“Vegan is a lifestyle,” says Marji. “We believe in living an enjoyable, healthy, balanced lifestyle—for your eating, health, family, exercise, finances. All of these things are intertwined. It’s not about deprivation. It’s about moving into something—something bigger, greater ... amazing.”

Meet Marji and Jasmine at the Washington, DC Metro Cooking Show at the DC Convention Center, Nov. 8-9, 2014. And find them online at anythingvegan.com.

From Green American Magazine Issue
Don’t Have A Cow

Don’t Have A Cow

Too Much Bad Beef
Best Option: Go Vegan!
5 Steps to Better Dairy
Something That Means Justice: An Interview with Suzan Shown Harjo
How Stereotypes Hurt: An Interview with Dahkota Franklin Kicking Bear Brown
Learn about our sponsor. 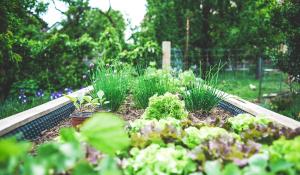