In age of climate change, can our lawns be more than landscaping? (Curbed) 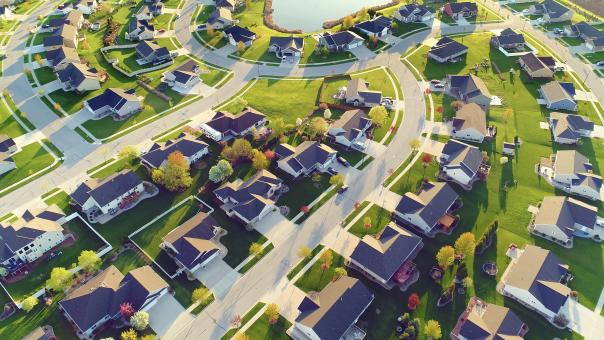 This article originally appeared in Curbed, on May 1, 2019

If Americans want to reduce their environmental footprints, one of the first steps may be reexamining what’s in their backyards. The lawn-industrial complex, and our country’s obsession over manicured carpets of green, has birthed a turf grass behemoth.

Lawns cover roughly 2 percent of the land area in the continental United States, or three times the area of the nation’s second largest irrigated crop, corn. Even in cities, lawns are by far the largest contributor to overall green space. A recent boom in exurban development on the fringes of metro areas suggests that this mass of grass will only increase.

They’re a perfect metaphor for so much about American culture and our relationship to the environment in an age of climate change. Beginning in the ‘50s, the spread of sprawl and suburbia led U.S. homeowners, and the corporations that profited from the sale of seeds, chemicals, and tools, to create a homegrown spin on the French concept of tapis vert, or “green carpet.” A decade ago, a study found that of the 116 million American households, only about 25 percent didn’t take care of some form of yard or lawn. Landscaping alone is nearly a $100 billion annual industry.

For the most part, the vast monoculture of perfectly mowed front yards, the biggest stretch of the American landscape under the control of average citizens, isn’t going anywhere soon. But slowly, and in relatively small ways, that’s starting to change.

Sparked by the recent droughts in states such as California, the idea of the lawn as a space for preservation and responsible stewardship has taken root out West, fueling nationwide trends towards native plantings, drought-tolerant landscaping, and even raising more crops as a path to reducing emissions.

According to Paul Robbins, a professor at the University of Madison and author of Lawn People: How Grasses, Weeds, and Chemicals Make Us Who We Are, there are signs, albeit small, of a significant shift. Americans still judge one another by their lawns, “ascribing the moral failings of outside the house with what happens inside the house.” But environmental values are starting to become part of the calculus.

“Shame used to be leveled against people who didn’t take care of their lawns enough,” he says. “Now, what’s happening is that has become inverted, at least in some places. If you take too good care of your lawn, you’re wasting water.”

The connection between the climate, and our homes

Our treatment of our lawns—dousing them with fertilizers, planting non-native species for aesthetics and ease of care, overusing water to keep these plants healthy regardless of the climate, and then trimming and shaping the trees and grass with equipment powered by pollution-spewing gas motors—says a lot about our stewardship of our environment.

But it can also say a lot about growing awareness, and the unrealized potential of collective action.

“We have more land in yards than in parks or other areas we tend to think of as green space and infrastructure,” says Dr. Carly Ziter, a professor at Concordia University who studies the carbon-capturing potential of lawns. “Even though you may think of them as small, they really scale up when you talk about an entire city.”

Ziter’s work has revealed some of the surprising powers of our backyards. A study she conducted in Madison, Wisconsin, found that the typical American lawn can capture carbon better than the land found in an untouched ecosystem.

Soil in residential lawns can also store high amounts of carbon, and planting a certain percentage of native plants does make a difference in supporting biodiversity. Lawns can be an ally in fighting climate change, and, along with trees, can help cool cities and reduce the urban heat island effect.

Of course, using a gas-powered mower can mitigate or even offset that advantage. But this is what her, and a number of advocates, suggest could be the real power of our lawns: small plots of land that allow us to take some form of control in the fight against the seemingly unstoppable forward progress of climate change.

“As a citizen, I can make a difference,” she says. “I can manage it in a way that contributes to the ecological fabric of the city and the life of a city.”

Of course, as if continuing to drive home its metaphorical power, even our great intentions about our lawns can obscure the reality of the overall environmental picture of the turf grass empire.

Environmental Protection Agency stats suggest that every year, Americans use 800 million gallons of gasoline caring for our lawns, and spill a further 17 million in the process (a spill, in terms of wasted gasoline, within the estimated range of the Exxon Valdez disaster). Artificial fertilizers use nitrous oxide that itself produces additional greenhouse gas, in addition to chemical run-off that seeps into groundwater. Speaking of water, the EPA also estimates the average U.S. household uses 320 gallons of water daily, a third of which is dedicated to landscape irrigation.

The lawn care industry quickly went from niche to industrial-scale over the last century. In the 1920s, the Scott company started selling grass seeds through the mail. After the post-war boom in (mostly white) homeownership, the industry truly became mass market. Even as more and more consumers make nods towards more sustainable lawns, they’re opening up niches and new business lines for succulents and drought-resistant, genetically modified grass strains.

“I don’t see changes in that industry,” he says. “The lawn industry isn’t turning over a new leaf but, bless capitalism, seeking new opportunities to make money.”

Backyard and back to the land

Where some see a lawn that needs ornamentation and new plants, others see a chance to change our relationship with our backyard agriculture into something, while not natural, at least more holistic.

“We can’t continue to go on like this,” says Fred Meyer of Backyard Abundance, an educational nonprofit that promotes gardens and healthy landscaping for food and self-sufficiency. “We can’t have turfgrass landscapes that don’t really help us, or help the rest of the planet.”

Meyer, who founded the group in Iowa in 2006, sees our backyards as a tool, as do many in the urban agriculture movement. Lawns can help feed us, as well as create habitat for butterflies, honey bees, and other creatures.

“Anybody who’s paying attention knows there are a lot more endangered species out there now than there were even just a few years ago,” he says. “Our landscapes can help solve that.”

“We can’t continue to go on like this. We can’t have turfgrass landscapes that don’t really help us, or help the rest of the planet.”

It may seem like a fanciful suggestion, more virtue signaling than actual accomplishment. But, done at scale, there’s something to the idea of a lawn as a natural staging ground, a mission adopted by a nationwide alliance of volunteers, nonprofits, and government agencies. Some of the more successful initiatives have pushed the idea of gardens as yards as waystops in larger, green infrastructure systems.

A project in Toronto called the Homegrown National Park Project, launched by the David Suzuki Foundation in 2013, encourages Canadians to plant native plants throughout their city, in vacant lots, alleys, and balconies. The program even hired park rangers to help promote new planting. It’s since spawned a follow-up of sorts, the Butterflyway Project, that’s creating a network of native wildflower plantings across the nation.

Others back up Ziter’s point about the power of lawns to reduce emissions by growing more food. Jillian Semaan, food campaign director of the environmental group Green America says that our backyards can become beachheads in a larger regenerative agriculture movement, focused on raising crops without the use of herbicides or pesticides, and help increase self-sufficiency.

Green America has launched a Climate Victory Gardens campaign, echoing the WWII-era program, to promote the idea of growing your own food as an easy way to contribute to the fight against climate change.

“During the original Victory Gardens campaign, the nation raised 8 million tons of food in 1944,” says Semaan. “We thought that would be a great idea, considering the climate crisis we’re in now, to bring back to victory garden concept for the planet.”

Both Meyers and Semaan’s organizations have raised awareness and encouraged action, and according to stats from Garden Research, one of the biggest growth areas in U.S. garden spending has been raised beds for vegetables.

But in terms of the global challenge of climate change, these grassroots efforts likely haven’t moved the needle substantially. Semaan said 1,300 people have signed up online to raise Climate Victory gardens. But it’s more about encouraging engagement that leads to larger collective action, Meyers says.

“Pretty much every environmental measurement is trending in the wrong direction. What the backyard movement means is that we can make small differences in our own landscape.”

“Pretty much every environmental measurement is trending in the wrong direction,” he says. “What the backyard movement means is that we can make small differences in our own landscape. They teach us how to advocate for larger scale action in our neighborhood and city.”

A symbol of greater awareness

Can the way we treat our lawns really make a difference, or are they the straw-ban equivalent of action: easy and performative, but ultimately, not taking all the drastic steps necessary to solve the larger issue?

Robbins sees evidence that these lawn trends, and beliefs, are taking root, though to what impact remains to be seen. In Madison, Wisconsin, a university town and liberal bastion, restored native prairie landscapes can be found everywhere. But does a proliferation of wild landscaping signify a commitment to big changes, or dressing up ecological disaster with a nice native shrub?

“I think these things need to be treated with a lot of skepticism,” he says. “People like to perform a certain kind of citizenship. Now, some people simply perform it via something other than nicely maintained turf grass.”