The Role of Receipts In Shopping While Black

“There are very few African American men in this country who haven’t had the experience of being followed when they were shopping in a department store. That includes me.” It’s been seven years since President Barack Obama spoke these words, and sadly, they never stopped being relevant.

The killing of George Floyd, after the murders of several other Black Americans, amplified a national (and even international) conversation about systemic racism, and racial profiling in stores is part of that. Racial discrimination ruins people’s shopping experience as they are treated unfairly while shopping. Beyond that, it can result in customers feeling unwelcome or even unsafe in stores as discrimination can threaten their physical safety if a manager calls law enforcement.

Racial profiling should not be seen simply as inconvenient for people; it can cause long-lasting harms and even life-threatening events. Studies have shown that discrimination is uniquely painful for Black people, increasing the likelihood of depression and capability of suicide.

Skipping the Slip Can Put People of Color at Risk

When Green America started our Skip the Slip campaign where we encourage retailers to preference a no receipt or digital option for customers checking out, we initially did not take account of the fact that the move away from digital receipts, which is good for the environment and human health, could endanger the lives of Black and brown shoppers. But, when California was considering the Skip the Slip legislation that at first mandated digital receipts for most retailers, and as we talked to organizations in the state about the impacts of that mandate, we quickly realized that, due to racism, people of color could be at risk walking out of a store without a paper receipt. In fact, paper receipts are a necessity for customers who are asked for proof of purchase, and Black and Latinx shoppers are asked this at disproportionately higher rates.

According to a 2018 Gallup Poll based on 6,000 U.S. adults, 30% of Black respondents said they were treated less fairly than white customers when shopping.

Such experiences include everything from “slights, like being ignored in favor of a white patron, to serious attacks on dignity and liberty, like being detained and questioned after making a purchase or handcuffed on suspicion of shoplifting.”

Additionally, there are stores that have been rolling out facial recognition technology largely in non-white, low-income communities. The cameras alert security agents if the system matches customers' faces to ones that have been previously caught engaging in criminal activity. Although the system aims to prevent theft and protect customers and employees, the fact that it’s predominantly used in communities of color is concerning. The system reportedly “doesn’t pick up Black people well”, which can cause the system to misidentify people, ruining their shopping experience and might even lead to arrest of an innocent person, or physical harm.

In some cases, employees are told by management to follow people of color, which may indicate that the issue is reinforced by a greater systemic racism. According to the National Association for Shoplifting Prevention (NASP), there is no profile of a shoplifter and it should not be correlated with race, age, gender etc., therefore, stores should put neutral policies and practices in place that monitor behavior of customers to catch shoplifters, not engage in racial profiling.

Companies should also provide easily accessible channels for employees or customers who see or experience harassment to file complaints. Additionally, companies must have processes and enforce policies to ensure that these complaints will be taken seriously, as well as conducting random third-party audits to ensure individual store compliance.

The problems with bias generally flow from the top of the organization and it can even be unconscious, which make prescriptive bias trainings largely ineffective. Instead, organizations should encourage “normalized, nonthreatening conversation about bias”. Cultivating an environment where such discussions are normalized brings more awareness to the issue and is more likely to achieve the behavior change intended: “The most effective learning happens over time, with topics surfaced and revisited repeatedly. These habits then need to be supported by systems that reduce bias at the source.” Eradicating these kinds of discrimination is key to ensuring lasting social peace in our society and will give everyone the same privileges, including something as leaving the store with digital or no receipt, and not worrying about it.

Stores Need to Stop the Discrimination

Because of accusations of racial profiling, some stores that used to check customer receipts upon leaving are putting an end to this policy.

For instance, Lowe’s suspended its receipt checking practice nationwide after customers complained Lowe’s was only checking receipts in specific stores in “high-theft” and “inner-city” locations.

Green America advocates for solutions that benefit the well-being of people and the planet, and no one should be left out of accessing these solutions. All customers should have a right to proceed in a store without fear of harassment or racial profiling. This shift in store practices needs to exist to create an environment that allows all customers to shop safely. Until these issues are tackled, electronic receipts are not a viable option for many, exposing them to human health risks from paper receipts coated in toxic chemicals. Green America will urge retailers to adopt anti-discriminatory practices and advocate for a more equitable and inclusive society. Retailers can also do more to advance racial equity by taking the Fifteen Percent Pledge and dedicating 15% of their shelf space to Black-owned businesses.

To learn more about the fight against racial profiling and how retailers can implement the policies proposed, we urge you to explore the following resources: 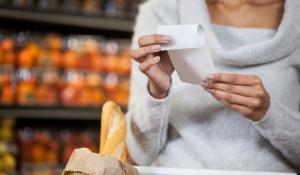