By
Leslie Samuelrich, with additional research by Tracy Fernandez Rysavy

Leslie Samuelrich is the president of Green Century Capital Management, a socially responsible mutual fund company established in 1991 by a group of nonprofit advocacy organizations (specifically, eight state Public Interest Research Groups and the Fund for the Public Interest). Today, 100 percent of profits earned from its mutual funds belong to its nonprofit owners. Green Century’s funds are fossil-fuel-free and “invest in environmental innovators, while avoiding those that are environmentally negligent in their policies, processes, and products.”

Samuelrich’s article below was adapted, with permission, from a piece that first appeared in the November 2015 issue of Green Money Journal. Photo at right, from left to right: Erin Gray, marketing and strategic analysis; Leslie Samuelrich, president; and Wendy Wendlandt, board member and founding trustee. 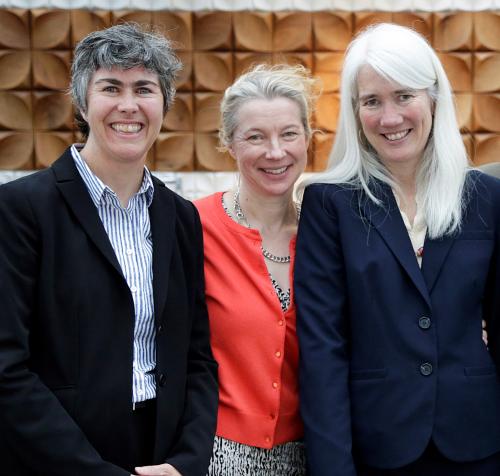 Companies that want to remain competitive must invest in women leaders. Several studies have confirmed that publicly traded companies with more women in leadership positions do better financially than companies with mostly male board members and executives. For example, Catalyst’s “Bottom Line” study, conducted from 2004-2008, found that “Fortune 500 companies with the highest representation of women board directors attained significantly higher financial performance, on average, that those with the lowest representation of women board directors.”

A 2014 world survey conducted by human resources consulting firm DDI found that when women are in leadership positions in a company, not just at the top but throughout a company’s structure, those companies tend to perform better than companies whose structures are male-dominated.

A February 2015 analysis by McKinsey & Company of 366 public companies across a range of industries in North America and the United Kingdom found that companies in the top quartile for gender diversity were 15 percent more likely to financially outperform those in the bottom quartile.

Finally, the Barclays Women in Leadership Total Return Index is a broadly diversified bond index. Companies included in the index must have a female CEO or have women in at least 25 percent of their board positions. The index has outperformed the S&P 500 by 1.2 percent each year from July 2000 to July 2014. (The company offers an Exchange Traded Note that tracks this index.)

Studies demonstrating the value of having women in leadership provide helpful data to concretely back up what many of us already know from our experience—women can be strong leaders, communicators, problem-solvers, and staff managers who can help a company not only survive, but thrive. And shareholders can help encourage companies to put and retain more women in their top roles.

One of the easiest ways to invest in women is through mutual funds that invest in companies with women in leadership. At Green Century, for example, we actively support women’s leadership in the companies in which we invest and want to press more companies to do the same.

Mutual funds may also dialogue behind the scenes with companies and file or vote to support shareholder resolutions to encourage greater numbers of women in top positions.

If you own stock, watch for shareholder resolutions around improving gender diversity on corporate boards and in corporate leadership—and vote to support them. If you own mutual funds, it’s the fund managers who vote on shareholder resolutions. If you’re unsure about how your fund may vote, contact its investor relations departments and let them know you want the fund to vote in favor of resolutions promoting greater board and leadership diversity.

The Thirty Percent Coalition (see below), a national organization of more than 80 members committed to moving women into 30 percent of all board seats across publicly traded companies, filed 20 resolutions during 2015 aimed at including more women and people of color on corporate boards. In addition, Calvert Investments,Trillium Asset Management, and Walden Asset Management all filed resolutions requesting that companies report on existing or adopt new board-diversity policies.

The Thirty Percent Coalition is a national organization of more than 80 members “committed to the goal of women holding 30 percent of board seats across public companies.”

The institutional-investor members have sent three rounds of letters to a list of publicly traded companies that have no women on their boards. They’ve also filed shareholder resolutions with companies that did not respond positively to the letters, calling on the companies to improve board diversity. Since the Coalition was created in 2011, more than 60 companies have appointed women to their boards as a result of Coalition efforts.

One of the most important ways companies can attract and retain women leaders is to create a culture that makes it possible for women to fulfill their work obligations and their roles as caregivers at home, for those who have children or are responsible for aging parents.
In her September 2015 New York Times opinion piece, New America Foundation president Anne-Marie Slaughter outlines how, although the US has “unlocked” the talent of its women at the high school and college levels, the ranks of those women still thin significantly as they rise toward the top, from more than 50 percent at entry level to 10 to 20 percent in senior management. Slaughter writes that “far too many discover that what was once a manageable and enjoyable work-family balance can no longer be sustained—regardless of ambition, confidence, or even a partner who shares tasks equally.”

She continues to drill down to a core problem that affects women, businesses, and our society: “Many women who started out with all the ambition in the world find themselves in a place they never expected to be. They do not choose to leave their jobs; they are shut out by the refusal of their bosses to make it possible for them to fit their family life and their work life together,” she writes.

At my prior job, at what would be easily considered a progressive organization with strong women leaders, there was no precedent or policy for parents to be able to work at home when I started there as a working mom. But we were doing such exciting work on corporate responsibility that I dug in to try to make the situation work.

Over time and with a supportive board, which was 50 percent female, the organization has adopted the accommodations they eventually made for me as policy. The result? An international organization that has tripled its budget and retained much of its top female leadership as they became mothers, and is a living example of how promoting women is good for growth.

Green Century digs deeper when we are reviewing companies for inclusion in our funds or engaging with them around an issue or potential shareholder resolution, asking how they attract and retain women. For example: Do they have flexible work time? Is there an informal or formal mentorship program for women? How many women stay after they have some kind of caregiving responsibility? In other words, the numbers matter, but so do the policies, culture, and details.

A Call to Action

But the roadblocks come up when that “change contradicts something we’ve long held as important,” says Brendan Nyhan, a professor of political science at Dartmouth who has studied how change occurs. If one has come to consciously or subconsciously believe that men are just better at being in charge, it can be more difficult to accept the fact that women also can lead effectively. In the end, Nyhan asserts that some people “can’t change unless the perceived consensus among figures we see as opinion and thought leaders changes first.”

If he is correct, then investors must attack this challenge together. And that means we must keep pushing. Pushing our firms, pushing our peers, pushing our boards, and pushing the companies in which we invest. We also need to support government policies that back the ideals with concrete support.

Why not start right now? As for why, I love paraphrasing the answer Canada’s new prime minister Justin Trudeau gave when asked why half of his cabinet is women: “It is 2015.”

SEC compliance information: Stocks will fluctuate in response to factors that may affect a single company, industry, sector, or the market as a whole and may perform worse than the market. Bonds are subject to risks including interest rate, credit, and inflation. The Green Century Mutual Funds’ environmental criteria limit the investments available to the Funds compared to mutual funds that do not use environmental criteria.

Past performance does not guarantee future results.

This information has been prepared from resources believed to be reliable. The views expressed are as of the date of this writing and are those of the Advisor to the Green Century Funds.
You should carefully consider the Funds’ investment objectives, risks, charges and expenses before investing. To obtain a Prospectus that contains this and other information about the Funds, please visit www.greencentury.com or e-mail info@greencentury.com or call 1-800-93-GREEN. Please read the Prospectus carefully before investing.