Are RXBAR’s as “clean” as they claim to be?

It is great to see more clean products popping up on grocery store shelves. But many companies are making bold claims and not necessarily backing them up. A popular new protein bar, RXBAR, markets itself based on its bold claim that its product is clean. But that all depends on one’s definition of “clean.” Here at GMO Inside we believe clean should mean that a product is free from exposure to toxic chemicals, is a result of high animal welfare, and without GMOs in its supply chain.

Though RXBAR claims its products are clean, as long as its eggs, nuts, and fruit are coming from the conventional food supply they are bound to be laced with toxic chemicals and a result of concerning animal welfare practices. RXBAR’s eggs likely come from chickens raised in factory farms.

The reality is if eggs aren’t coming from organic pasture-raised production and/or certified by a transparent third-party organization, the chickens producing those eggs are exposed to very poor unhealthy conditions and are fed GMOs. These conditions aren’t just unhealthy for the animals, they are disastrous for the environment and those that live “downstream” of chicken operations. 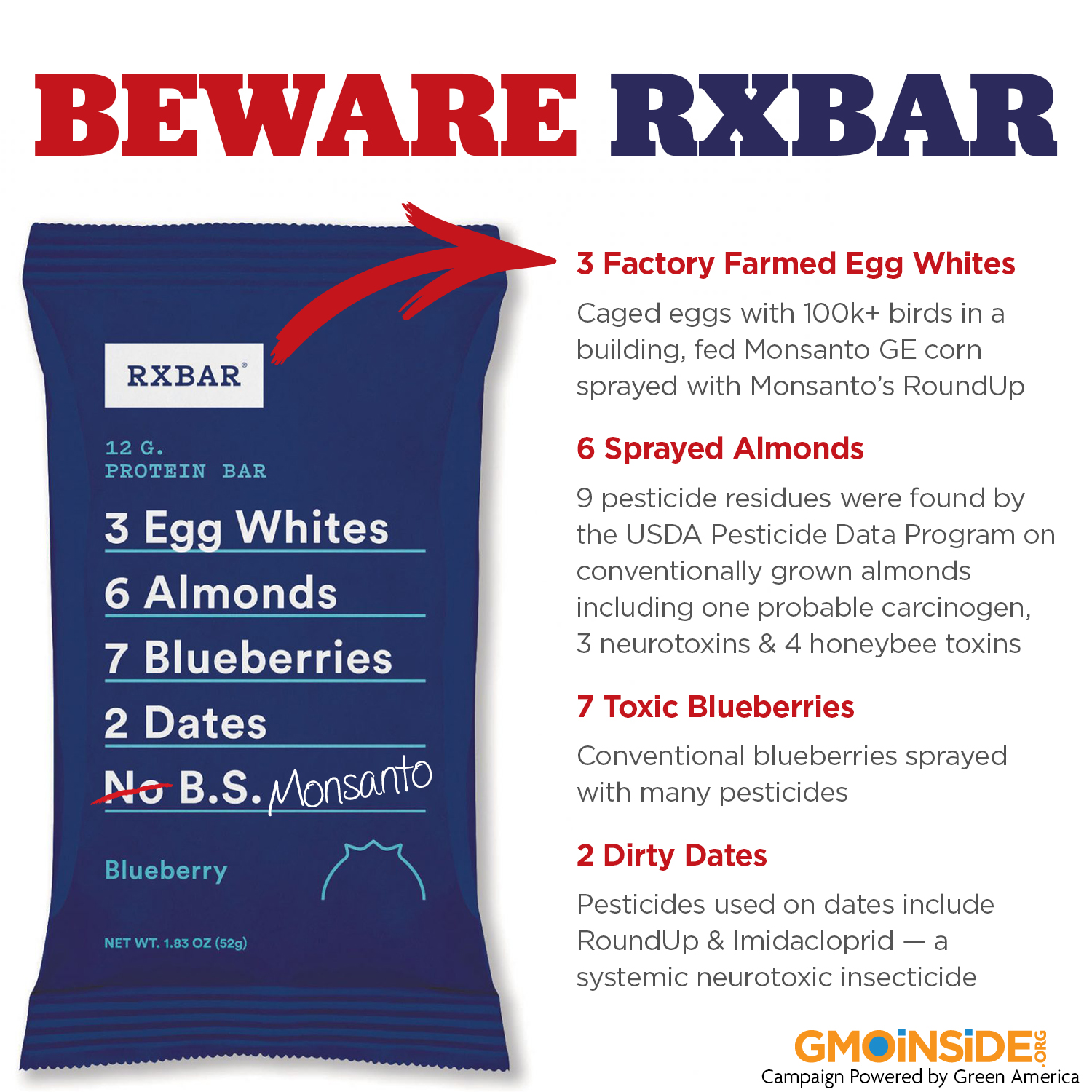 Concerns about Eggs and CAFOs

Gone are the days of pastures, barns, field crops, and farm animals. Eggs are produced in industrial operations with hundreds of thousands of laying hens in each facility, growing by nearly 25 percent from 1997 to 2007. Nearly half of egg production is concentrated in five states: Iowa, Ohio, Indiana, California, and Pennsylvania. Egg operations have grown by 50 percent in the same ten-year period, averaging 750,000 hens per factory farm.

The way laying hens are raised directly affects their well-being and health. Egg-laying hens are subjected to mutilation, confinement, and deprivation of the ability to live their lives as the active, social beings they are. More than 90 percent of eggs in the US are produced in confinement conditions. Welfare abuses run rampant in egg CAFOs including: killing male chicks upon hatching because they have no value to the egg industry, debeaking young female chicks causing severe pain, living in battery cages with the equivalent of less than a sheet of paper of floor size, being subjected to a process called “forced molting” where hens are starved and deprived of food for up to two weeks to shock their bodies into the next egg-laying cycle, and slaughtering them after their egg production declines in 1-2 years even though the lifespan of an industry chicken would be 5-8 years.

There is growing concern about the living conditions in which food animals are raised; however, there is little oversight when it comes to product labels. Most egg labels have no official standards or oversight or enforcement mechanisms, nor much relevance to animal welfare. Labels include cage-free, free-range, free-roaming, pasture-raised, certified organic, vegetarian-fed, and more. The highest-welfare eggs come pasture-raised with certification from Animal Welfare Approved. Unfortunately, few farms are certified to this standard. Though the state of California now requires chickens sold in the state to be raised cage-free this does not guarantee animals access to the outdoors and can mean the animals spend the vast majority of their lives in crowded chicken houses.

Even certified organic is not without flaws. According to a report by Cornucopia, industrial-scale organic egg producers, with facilities holding as many as 85,000 hens each, provide 80 percent of the organic eggs on the market. This means that less than half of a percent of egg-laying hens in this country are on pasture-based farms. Therefore, it is important to dig deeper and do research into the company. Local producers offer a shorter supply chain and more transparency.

Large hen facilities house hundreds of thousands of animals in each structure and result in Salmonella poisoning of eggs. Due to a Salmonella outbreak in 2010 where close to 2,000 cases in three months were reported, the US experienced the largest shell egg recall in history—half a billion eggs. While Salmonella rates are higher in battery cage systems, it is still a problem for cage-free facilities due to the sheer number of hens living in such close quarters.

As seen in other factory farm operations for pigs and cows, chicken CAFOs produce higher levels of waste that can be disposed of in a timely and environmentally responsible manner. The imbalance of a large number of animals in an increasingly smaller space causes mountains of fecal matter to pile up. Ammonia levels increase, negatively impacting air quality and water quality, running off into local streams and rivers. According to the Natural Resources Defense Council (NRDC), ammonia can be carried more than 300 miles through the air before returning to the ground and then into waterways. The nutrients in runoff from animal waste can then cause algal blooms, which use up the water’s oxygen supply killing all aquatic life, leading to “dead zones.” Dead zones in the Gulf of Mexico are growing larger every year, in addition to those along the East Coast.

In addition to having a devastating impact on aquatic life, industrial egg production also contributes to climate change. After assessing the life cycle of eggs from “cradle-to-grave” production, the Environmental Working Group reported that consuming two extra-large eggs is equivalent to driving a car more than one mile.

GMOs and growing herbicide resistance have increased the use of toxic chemicals on crops, polluting our soil and water and posing a significant negative environmental impact. Corporate control of GMOs hurts small farmers. The biotech and chemical corporations, such as Monsanto, spend millions to support anti-labeling efforts and keep consumers in the dark about their food. There are also health risks. Monsanto's GMOs are not yet proven safe for human health—the FDA does not require independent testing of GE foods, allowing for many of the studies on GMOs to be industry-funded and heavily biased. The vast majority of egg laying hens (egg-producing chickens) are fed Monsanto's GE corn and soy sprayed with Monsanto's Roundup.

Conventionally grown almonds and fruit are often sprayed with toxic pesticides. Recently, nine different pesticide residues were found by the USDA Pesticide Data Program on conventionally grown almonds including one probable carcinogen, three neurotoxins, and four honeybee toxins. The most common pesticides used on dates include Roundup and Imidacloprid, a systemic neurotoxic insecticide. RXBAR's can't be considered "clean" while they continue to use non-organic ingredients.

Eggs are part of many people’s daily lives and the choices we make around eggs and products containing eggs have a huge impact on people and the environment. We can all help by making informed and conscious choices when purchasing your eggs. Companies like RXBAR can make a difference by living up to their marketing claims and pushing the egg industry to change its ways, working to provide truly “clean” products for its customers.