Are Cheerios Really a Healthy Choice?

“Are Cheerios Really a Healthy Choice?”

Cheerios are an iconic breakfast cereal eaten by millions of American’s every day, owned by staunch GMO enthusiast General Mills. These millions of Americans have been told by General Mills that Cheerios are a healthy breakfast and snack item that brings the benefits of wholesome oats, low sugar, and essential vitamins and minerals into their diets.

While GMO Inside recognizes that whole grains like oats, moderation of sugar, and balanced consumption of vitamins and minerals are certainly part of a healthy eating plan, a deeper look at Cheerios uncovers that their claimed benefits are also accompanied by a high risk of GMOs, surprisingly controversial ingredients, and a less than stellar overall nutritional profile.

Taking a careful look at Cheerios, GMO Inside would like to help consumers answer the question; Are Cheerios really a healthy choice?

Let us start by breaking down the ingredients for the entire Cheerios line. GMO Inside has bolded the likely GMO ingredients in each variety below.

Once again, all of the Bolded ingredients above are likely GMOs.

Currently on the Cheerios website, General Mills claims their Cheerios varieties are a part of a healthy diet because they are low in saturated fat, naturally cholesterol free, can help lower cholesterol, are made with whole grains like oats, and provide essential vitamins and minerals.

Over the years public perception has been shaped by these and similar claims so that Cheerios cereals have become widely considered to be a healthy choice that is low in sugar, unprocessed, and made with natural ingredients.

But what is true, and what is fiction? Let's break it down.

Are Cheerios Made with Wholesome Grains and Oats?

Originally called “Cheerioats”, the Cheerios name was selected so the cereal would be associated with the taste and wholesome appeal of oats. One of the main nutrition angles that General Mills exploits is the use of natural oats in Cheerios, however, in seven out of the twelve Cheerios varieties currently sold in the U.S. marketplace, oats are not even listed as the first ingredient (remember, ingredients are listed in order of abundance by weight within a product).

Are Cheerios Low in Sugar?

In terms of Sugar - Only Regular Cheerios, Multi Grain Cheerios, and Dulche De Leche Cheerios have less than 9 grams of sugar per serving. The nine other Cheerios varieties have a sugar content that is much too high to be considered low or healthy when compared to other accessible breakfast cereal options. The American Heart Association recommends that women consume no more than 25 grams of added sugar per day, and no more than 38 grams for men.  The average amount of sugar per serving (1 or ¾ Cups depending on variety) across all varieties of Cheerios is 7.92 grams per cup or quarter cup.

Conversely, the more sugary varieties of Cheerios: Honey Nut Cheerios, Apple Cinnamon Cheerios, Banana Nut Cheerios, Chocolate Cheerios, Multi Grain Cheerios Peanut Butter, Fruity Cheerios, and Yogurt Burst Cheerios - have a smaller serving size of ¾ Cup. This is not something that Cheerios advertises as broadly as the other aspects of its cereals, probably because it would draw attention to the fact that even though you are supposed to be eating less of these Cheerios varieties, you are still getting more sugar. Since this is not as widely publicized, then there are almost certainly consumers who are unaware of these different serving sizes and are starting their days off with an even higher amount of unexpected sugar.

Do Cheerios Reduce the Risk of Heart Disease and High Cholesterol?

Cheerios are infamous for their heart healthy claims and for being low in saturated fat and cholesterol. The brand in the past pushed these claims so heavily that in 2009 the FDA had to send a letter asking General Mills to alter Cheerios marketing strategies because of “unauthorized health claims” and because said claims would mean that Cheerios would fall under the label of an “unapproved new drug”. Cheerios has since reworked their marketing and health claims into the message that Cheerios CAN be a part of a healthy diet that COULD reduce the risks of heart disease.

It is important to note that part of what allows Cheerios to claim that it can be part of a diet that could reduce the risk of heart disease is the cereals’ fiber and whole grain content. We already covered the whole grain aspects of Cheerios, and when looking at fiber it appears that ONLY Regular Cheerios, Honey Nut Cheerios, and Yogurt Burst Cheerios contain soluble fiber, with Cheerios having just 1 gram per serving, Honey Nut Cheerios having 0.75 gram per serving, and Yogurt Burst Cheerios with “less than 1 gram of soluble fiber”.

Concerning insoluble fiber, listed on the boxes as dietary fiber – Only Regular Cheerios, Multi Grain Cheerios, Multi-Grain Cheerios Peanut Butter, and Cinnamon Burst have over 2 grams of Dietary Fiber. The remaining 8 out of the 12 varieties are only at an inadequate 2 grams per serving.

The bottom line for this is that if you are eating cereal for breakfast and we were only paying attention to fiber numbers, then regular Cheerios is the only variety of Cheerios that would provide an adequate amount of fiber to start your day in a healthy way.

What about the other ingredients in Cheerios that are not bolded because of a high risk of being GMOs?

BHT is Butylated Hydroxytoluene a food additive used to preserve freshness in some products, but in scientific studies it has been shown to be possible carcinogen. As shown above, BHT is used in Chocolate Cheerios, Dulche De Leche Cheerios, Multi Grain Cheerios Peanut Butter, Cinnamon Burst Cheerios, Fruity Cheerios, and Banana Nut Cheerios.

Other ingredients used in some or all of the Cheerios varieties that have raised red flags for health conscious consumers include: Trisodium Phosphate, Artificial Colors, Natural Flavors, Vanillin (synthetic Vanilla), Corn Syrup, Soy Lecithin, Maltodextrin, and Glycerides. Each of these ingredients have been possibly linked to negative health impacts by studies in recent years and many health conscious consumers have put these ingredients on their do-not-eat lists.

The most common GMO crops to look out for in the U.S. are Soy, Corn, Cotton, Canola, Sugar Beets, and Papaya. Foods that clearly have these words in their ingredient lists are all at risk of being GMO if they are not certified organic or Non-GMO.

General Mills sources its corn from the United States, where 88% of the crop is genetically modified, and our ingredient breakdown showed that corn-based ingredients are a common ingredient in all Cheerios varieties. While the corn ingredients are easy to spot and flag, some other high GMO risk ingredients that have been bolded are a little more inconspicuous. For example, Vitamin E is in each and every one of the Cheerios products, and is a hidden GMO ingredient that many consumers are unaware of. Vitamin E in Cheerios comes from Mixed Tocopherols which are most commonly derived from soy, corn, or cotton –the most extensively genetically engineered crops. For a list of other GMO ingredients that are commonly hidden in processes foods, Non-GMO Shopping Guide has built this highly useful list.

Cheerios of all types are loaded with likely GMOs, and the brand across the board does not live up to the positive public perception and nutritious message that General Mills has cultivated through years of advertisements, loose health claims, and public relations strategies.

For people interested in eating for optimal health, consuming whole foods and staying away from processed products are good basic guidelines to follow. The lengthiness of the Cheerios ingredient lists and the inclusion of unrecognizable synthetic ingredients, unnecessary and controversial food additives, cheap sweeteners, and unwholesome ingredients are directly inconsistent with those basic health rules.  After reading the labels, it should be clear that there are definitely safer and less processed sources for your breakfast fiber, vitamins, and whole grains.

What Can We Do?

If you are an individual concerned about the risks of GMOs and the health of your families and the environment,  GMO Inside invites you to reach out to General Mills through our petition and let Cheerios know what you think of their use of GMOs on their Facebook Page.

We also invite you to become a GMO Insider by signing up for our e-alerts about GMOs or by connecting to us on Facebook.

If you have any questions about GMOs or comments about how some of these ingredients are at high risk of being a GMO, please leave a comment below! 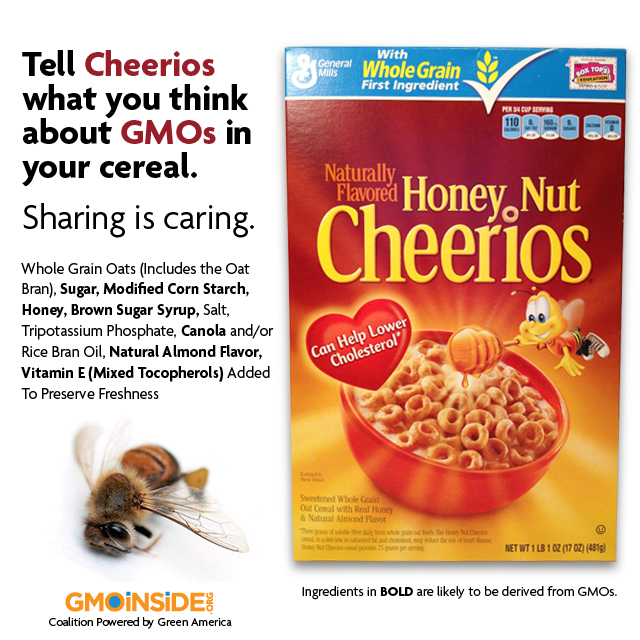