Recycle your kitchen waste into soil for your lawn, garden, or houseplants -- all with the help of thousands of new friends.

Like many of us, Jeannette Stewart didn’t always pay attention to what happened to her garbage after she tied off the tops of her trash bags. But when she learned that the landfill near her Fairfax, Virginia home was so full it had to close, she started noticing how much garbage she and her neighbors generated, and resolved to reduce her output of waste.

“I saw our enormous trash bins being filled up with these plastic bags just overflowing from the top, and I thought, ‘This is an enormous problem,’” says Stewart, who began looking for creative ways to reduce her volume of trash. Soon, Stewart found part of her solution in indoor worm composting (also called vermi-composting), a simple, compact and low-maintenance way to recycle organic household waste into nutrient-rich soil. Worm composting is so compact, it even works for apartment dwellers. All you need to get started is a bin, some worms and a habitat moist and temperate enough to keep your worms happy.

The Bin: The size of your worm bin can vary based on the amount of space you have available or the amount of garbage you will need to compost. Stewart recommends 10-gallon plastic storage containers, for processing the waste of two people. For those short on space, a bucket under the sink can work, as long as you empty the compost regularly. Five-gallon buckets are often available for free from restaurants or supermarket.

To keep your worms happy and healthy, ventilate your bin with at least 20 quarter-inch holes in both the top and the bottom of the bin, covered by a mesh. Because the composting process can generate liquid waste, you will want to place a tray beneath your bin to capture any leakage. This “worm tea” is an excellent source of nutrients for houseplants.

The Worms: The best composting worms are “red wrigglers”, available from bait shops or worm farms. (See the resource link at the end of the article for online worm retailers, or search for “worm farms” online to find a source near your home to minimize transportation time, cost and energy.)

The Habitat: Fill your bin to a depth of at least 12 inches with moistened bedding before adding the worms and their food. One-inch-wide strips of black-and-white newsprint is optimal bedding material, although other cellulose-based materials such as yard waste, sawdust and plant clippings can be added. The newspaper should be moistened to the dampness of a wrung-out sponge. Add one cup of dirt per square foot of bedding to aid the worms’ digestion.

When choosing were to place your bin, keep in mind that the worms will be happiest at a constant temperature of about 65 – 75 degrees Fahrenheit, but can tolerate temperatures as low as 50 degrees or as high as 80 degrees.

Almost all of the waste produced by a vegetarian diet free from packaged pro-cessed foods can be converted to soil by your worm composting bin. Avoid adding processed foods, like potato chips, or any foods containing oils, meats, or eggs, although crushed eggshells are fine.

Because red wrigglers are used to living in the soil, be sure to bury their food, rather than placing it on top of the bedding.

After about three months, the worms will have converted the entire contents of a 10-gallon compost bin into rich worm castings, useful as a fertilizer for gardens, lawns and houseplants.

There are two methods for separating the worms from the compost. Because the worms avoid light, dumping the contents of your bin onto some newspaper will send the worms wriggling toward the center of the pile. You can then begin removing the outer layers of compost. A second separation method is to divide your bin in half. If you push the compost to one side of the bin, while adding bedding and food to the other side, eventually all of the worms will migrate, and you can harvest the worm-free compost while keeping your bin in constant use. If you end up with more compost than you can use, give some to a friend or a community garden, or tuck some into a city tree box.

Though worm composting represents responsible waste management at its best, even some dedicated green consumers, fearing unpleasant odors or the attraction of pests, still balk at the idea of inviting thousands of worms to live in their home.

Because the worms eat so quickly and efficiently, your food scraps actually won’t have time to rot, creating unpleasant smells. Some denser, tougher items may take longer for the worms to consume, but keeping them buried in the bedding will pre-empt odors. If your bin smells bad, you may be over-feeding, or not properly ventilating. Try giving the worms less food or adding more air holes.

A properly maintained bin is unlikely to attract pests. Some harmless creatures such as small snails, pill bugs and especially spring mites may be introduced to the bin when you add the dirt, but they will not escape into your house. As Stewart says, “ The composting world requires a specific habitat, and your house is not the habitat. The habitat is the bin.”

In this self-contained habitat, your healthy, well-fed worms will thrive and breed, and eventually you will need to thin the herd and start a new bin.

Consider assembling a bin for a friend, donating your extra worms to help others integrate their patterns of consumption into a natural cycle of growth and decay that is easy on the Earth.

How to Green Your Transportation

Green Your Energy Use

How Green Americans Are Coping with Quarantine
(April 6, 2020)

When we started quarantine a few weeks ago, we sent an email to all of our members around the country and around the world, asking what they were doing to cope with the personal challenges of physical distancing on top of the global challenge of the COVID-19 pandemic that is causing all of us 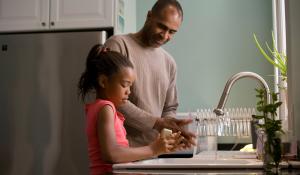 The skin care industry is heavily greenwashed, with claims of natural, organic, and clean products to help you achieve a healthy glow. This is especially pertinent in the time of covid-19, in which frequent hand washing and sanitizing can lead to skin irritation without proper care.

A (More) Sustainable Guide to Refreshing Your Look
(August 1, 2019)

For some people, summer is ending much too soon; for others, they can’t wait for the start of fall … and the new school season.

In industry first, 60 companies call on US insurers to drop fossil fuels

Over 157,000 Consumers Call on Home Depot and Lowe’s to End Sales of Cancer-Linked Roundup