by Thomas Kelley via Unsplash

As the old saying goes, we are what we eat—and the highly processed foods we’re eating are not good, for us, for workers, or for the planet. When the Green America editorial team and I started to research this issue, we planned to focus on the environmental and labor impacts of sugar, as well as its potential toxicity, stressing how much of it comes from genetically modified sugar beets. But what wound up alarming us the most were the increasing number of new studies showing that sugar is fueling not only obesity and diabetes, but Alzheimer’s, cancer, heart disease, and auto-immune issues. These health assaults are hitting communities of color the hardest.

The Perils of Processed Sweets

My personal sugary wake-up call started while reading Pulitzer-prizewinning reporter Michael Moss’s new book. In Salt, Sugar, and Fat (Random House, 2013). Moss points out that the dietary foundation of every processed food on the market rests solely on the three ingredients in his book title. In fact, he writes, the processed food industry carefully engineers these three ingredients to encourage cravings and overconsumption:

“To make a new soda guaranteed to create a craving requires [calculating] what industry insiders call the ‘bliss point,’ or the precise amount of sugar or fat or salt that will send consumers over the moon.”

And, notes Moss, when food manufacturers pull back on one of the big three ingredients, they’re likely to increase the other two: “Any improvement to the nutritional profile of a product can in no way diminish its allure, and this has led to one of the industry’s most devious moves: lowering one bad boy ingredient like fat while quietly adding more [of another, like] sugar to keep people hooked.”

After reading Moss’s first chapter, I looked at the nutrition label of the organic granola bar I was noshing on over my tablet computer and discovered that tiny little package contained two-and-ahalf teaspoons (12 grams) of sugar. The pretzels I usually feel good about snacking on contained 0 grams of sugar, but 259 mg of salt. And my favorite “healthy” juice? 22 mg of salt and over six teaspoons of sugar (32 g) in one serving. Forget vitamins, minerals, and fiber—my favorite snacks were loaded with salt and sugar, with a side of fat.

Nothing has woken me up to the health perils of all processed foods more than Moss’s book.

As we continued our research, the Green America editorial team quickly realized that perhaps the most formidable of these three core processed-food ingredients is sugar. People crave sugar from birth, writes Moss. In fact, adds Dr. Robert Lustig, a pediatric endocrinologist at the University of California-San Francisco, “our brain lights up for sugar in the same way it does for cocaine.”

Lustig, in fact, says that sugar is, quite simply, a toxin.

The average American eats over 108 grams (22 teaspoons) of sugar a day, or 130 pounds a year, says Lustig in his book Fat Chance: Beating the Odds against Sugar, Processed Food, Obesity, and Disease (Hudson Street Press, 2013). Our consumption of fructose—the problematic component of sugar and high-fructose corn syrup (HFCS)—has doubled in the past 30 years, largely because Americans started becoming concerned about the amount of fat in food.

Manufacturers responded by reducing fat but increasing fructose, both in the form of sugar and HFCS. At 55 percent fructose, HFCS has only five percent more fructose than sugar (50 percent), making them both roughly equal dietary nightmares.

“Take the fat out of food, it tastes like cardboard,” says Lustig, echoing Moss. “And the food industry knew that. So they replaced it with sugar.”

That move, he says, is killing us:

Could sugar consumption be behind this discrepancy? Communities of color are far more likely to meet the criteria of “food deserts,” or areas where most people do not have a grocery store within a mile of their homes. Lacking access to fresh produce, the more than 23 million Americans who live in food deserts, according to the US Department of Agriculture, are often forced to resort to fast food and processed foods from convenience stores—which, as Moss reminds us, have more than their share of salt, fat, and sugar.

When it comes to obesity, place and access to healthy food matters. From 2008 to 2010, researchers from the University of Chicago conducted a powerful study, in which they offered rent vouchers to low-income mothers, who were mostly black and Latino, so they could move from very poor neighborhoods to less disadvantaged areas. The study, published in the New England Journal of Medicine in 2011, found that the moms who moved to a better neighborhood lowered their risk of becoming “extremely obese” and contracting type 2 diabetes.

While the study didn’t point to sugar as the underlying cause, it’s easy to draw links between the salt, fat, and sugar in processed foods and the poor health of the people living in food deserts. And since food deserts tend to occur around color lines, it’s clear that sugar has a race-based impact, as well.

It’s hard to mess with the warm and wonderful childhood memories that center around food, especially sugar-sweetened holiday and birthday treats. But, as Green America’s online editor Andrew Korfhage points out here, it’s not just our own health at stake: workers at many conventional sugar plantations around the world labor for poverty level wages under sweatshop-like conditions.

Add in genetically modified sugar beets and the pesticides coating conventional cane and GM sugar beets—including potentially carcinogenic atrazine and RoundUp/glyphosate—and it’s becoming ever clearer that Americans need to be more mindful about consuming sugar not just in moderation, but as little as possible. 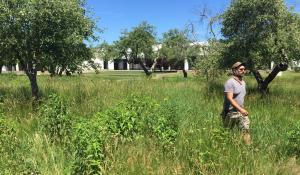 Since 1998, Owen Wormser has been designing and building landscapes with a focus on sustainability, regeneration, and beauty. His work is rooted in perspective and expertise drawn from landscape architecture, horticulture, permaculture, organic agriculture, and ecology.

What Practices Make My Garden a Climate Victory Garden?
(February 13, 2018)

As an environmentally-conscious gardener, you can adopt practices that maximize soil protection in your garden—this is where we’re st