This merger would threaten food supplies around the world. Who will stop it? (TheGuardian) 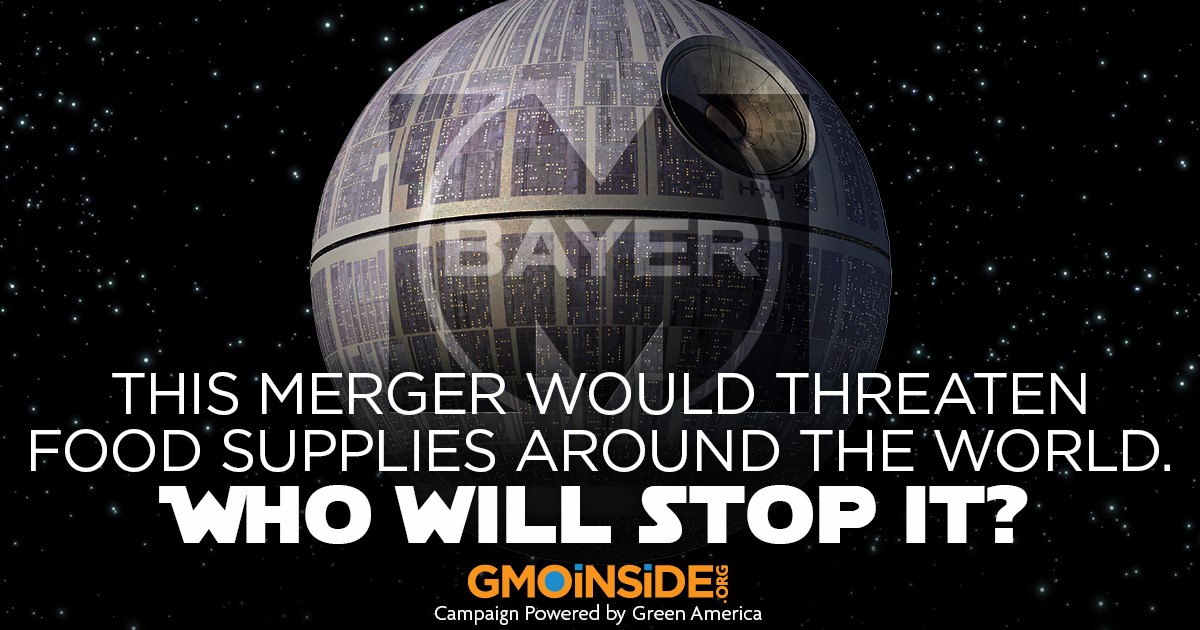 Originally published by The Guardian
By Hannah Lownsbrough
8/23/17

It’s the worst corporate merger you’ve probably never heard of, and one that could spell disaster for our global farming system. Bayer recently started the clock for the European Union to approve its $65bn takeover of Monsanto. On Tuesday, EU regulators announced that they would now launch an in-depth assessment of the merger on anti-competitive grounds – what it calls a “phase 2 investigation” – which will take several more months.

If approved, the merger would be an extremely risky consolidation of corporate power, not to mention a serious threat to food supplies and farmers around the world. It is essential that regulators properly investigate it and take decisive action before it’s too late. Campaigns that mobilise ordinary citizens to challenge the merger will be a big part of encouraging regulators to face up to these mega corporations in the coming months.

There are good reasons to be worried. The merger would eliminate direct competition between two of the biggest players in the “traited” seed market, in other words, the market in seeds that have been developed or engineered to have certain qualities that make them more profitable. There could be major consequences for seed development, herbicide markets and robust, open research and development processes.

The corporation spawned from the merger would control nearly three quarters of the cotton-growing land in the US, which is far too high by any reasonable test of monopolistic control. There would be a huge concentration of the market in large swaths of seed development and sales for other commonly used seeds, including traited strains of canola, soybeans and corn. The merger would also increase Monsanto’s control over other areas in which it is already a dominant player, including fertilisers, pesticides and farming technology.

Ultimately, the merged corporation could “bundle” these products together, with farmers having few alternative options. The corporation could push prices up for farmers, which would ultimately end in increased food prices for consumers, too. The non-biotechnology choices could be pushed further and further to the margins of the market, potentially to the point of disappearing. Farmers and consumers could be badly affected, around the world.

Of course, these burdens would not be borne equally. As is almost always the case, the heaviest load would fall on the smallest farms and the poorest consumers. Small, family-owned farms are unlikely to be able to bear yet more price increases for the staples they rely on to do business, and would have to sell out to big, agribusiness operators who can shoulder higher costs. Farming families and communities across the world could end up carrying the can for the ruthless profiteering of this newly minted corporate giant.

In 2016, SumOfUs members crowdfunded a legal opinion written by two former US justice department officials from the antitrust division which argued that a merger between Bayer and Monsanto would violate the Clayton Act, a law enacted by US Congress to curb anti-competitive business practices. According to the paper, a Bayer-Monsanto merger would break with a 2008 court order in which Monsanto was forced to divest itself of certain cottonseed and cotton breeding assets which were sold to Bayer. If the merger proceeds, Monsanto would re-acquire these anti-competitive traits and violate the US department of justice’s judgment.

SumOfUs members are part of a huge, global movement including millions of people speaking out against this dangerous merger. Not only have they chipped in thousands of pounds to cover the cost of the legal opinion, they have also signed petitions, called decision-makers and spread the word through their own networks to help increase pressure on governments in the EU and US to do the right thing and stop the merger.

The EC's decision to enter into a phase 2 inquiry comes after months of sustained pressure. Consumer pressure works

Campaigning groups have been successful at putting this merger on top of the political agenda, both in Brussels and Washington. Just a few weeks ago, several leading Democrats signed a joint letter to the US department of justice demanding an in-depth probe of the proposed merger. The European commission’s decision to enter into a phase 2 investigation of the merger comes after months of sustained pressure from SumOfUs members including thousands of postcards sent directly to EU competition commissioner Margrethe Vestager. Consumer pressure works.

It is far easier for politicians to turn away from the alarming prospect on taking on two of the world’s largest agribusiness corporations. But with enough pressure from their voters and public opinion, they can be induced to push regulators to take on the challenge of bringing them to heel.

In the months to come, SumOfUs will redouble our efforts to stop the merger between Bayer and Monsanto. We are working with farmers, beekeepers and environmental groups to stop the further consolidation of our food supply. We urge Vestager to consider the disastrous implications of this merger and for citizens to write to her expressing their concern.