Front and Center at the Revival of the Electric Car 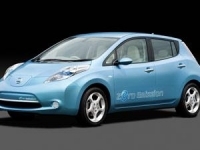 SAN JOSE, CA — Is the BP crisis escalating the comeback of the electric car? While the promise of petro-free driving is piquing consumer interest, forward-thinking have been gearing up for electrification for over a decade.

The world's top players will address the future of plug-in hybrid and electric transportation at Plug-in 2010 later this month.

The great electric vehicle race of 2010 was on even before the Gulf oil spill became the worst environmental disaster in U.S. history. As pundits ruminate over a correct response to this catastrophe, automakers, component suppliers, government agencies, utilities and many others are eschewing skepticism for action.

This block is broken or missing. You may be missing content or you might need to enable the original module.
Learn about our sponsor.

Green America's Green Business Network® is the first, largest, and most diverse network of socially and environmentally responsible businesses in the country. Home to both rising social and eco enterprises and the most established green businesses around.