Is Your Baby Part Of a Risky Science Experiment? 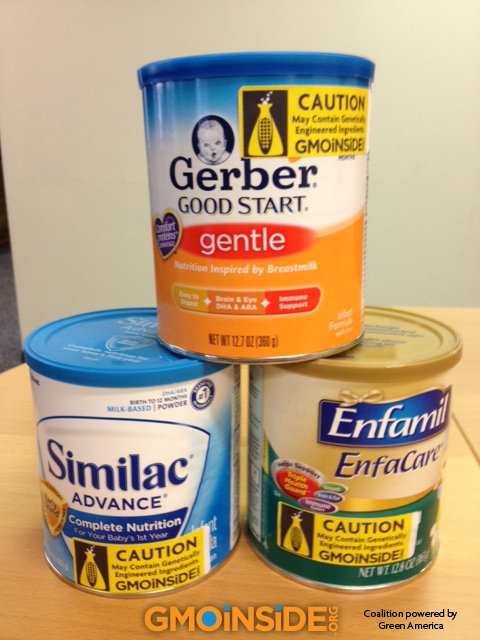 Washington DC – Similac, Enfamil, and Gerber Good Start – which combined account for more than 90 percent of all infant formula sales in the US – are exposing American and Canadian babies to potentially grave health risks by using genetically modified ingredients.  Commonly referred to as GMOs (genetically modified organisms), these ingredients have been banned or at least require a packaging label in more than 60 other countries including China, Mexico, Russia, and the entire European Union.

GMO Inside, a national, non-GMO coalition led by Green America, is calling on these brands’ parent companies (Abbott Laboratories, Mead Johnson Nutrition, and Nestlé), via an online petition, to remove GMO ingredients immediately as infants face particular health risks when it comes to consuming GMOs.

GMOs have never been proven safe for human consumption and a growing number of peer‐reviewed studies show the negative health impacts of consuming GMOs on laboratory animals over their life span.  Inadequate research has been conducted on the health impacts on GMOs humans and infants; however, an increasing number of concerned parents and pediatricians have voiced that using GMOs in infant formula is far too large of a risk to take.  Babies are particularly vulnerable when it comes to consuming GMOs as their digestive and immune systems are not fully developed and GMO crops have very high exposure to dangerous pesticides and herbicides such as Roundup.  Infant livers do not reach maturity for about two years and therefor are less equipped to process toxins in the body, such as the high levels of chemicals used on genetically modified foods.

“For the infant that is unable to nurse I insist upon an organic commercial formula,” says pediatrician  Michelle Perro. “Because of the toxic effects of herbicides, particularly glyphosate (due to its prolific usage) as well as other organophosphates and genetically engineered foods in non-organic commercial formulas, these are not an option for infant feeding.  In order to ensure the health of our infants and children, there is no amount of acceptable herbicide or GMO that should be in their diets.”

Adding insult to injury, these companies all spent money to oppose GMO labeling in California last year, thus obstructing a parent’s right to know whether or not the first food they are feeding their newborns contains GMOs.

Unlike more than 60 countries around the world, the United States and Canada do not require companies to label and reveal their GMO ingredients to consumers.  This means that American and Canadian babies are exposed to ingredients that parents in Europe, China, and elsewhere would never feed their children.  In fact, due to these labeling requirements, all three companies offer non-GMO formula options to their consumers in Europe.

“It’s infuriating that parents in the United States are not given the same assurances as citizens in more than 60 other countries including China, Mexico, and Saudi Arabia, when it comes to GM ingredients,” says Green America President Alisa Gravitz, “All parents have a right to healthy food options for their children.”

So who are these companies peddling these unhealthy infant formulas?

Throughout May, GMO Inside will call on Abbott Laboratories, Mead Johnson Nutrition, and Nestlé to remove their GMO ingredients, while also offering consumers suggestions for non-GMO choices.

Consumers can sign our petition to the companies here or take action with us on Facebook at https://www.facebook.com/GmoInside

Food Democracy Now! is a grassroots community dedicated to building a sustainable food system that protects our natural environment, sustains farmers and nourishes families. Food Democracy Now! members know we can build a food system that gives our communities equal access to healthy food, and respects the dignity of the farmers who produce it. We believe in recreating regional food systems, supporting the growth of humane, natural and organic farms, and protecting the environment.

GMO Free USA works to harness education, advocacy, and bold action to foster consumer rejection of genetically modified organisms, until they are proven safe. They support the labeling of GMO foods with the ultimate goal of getting GMOs out of the food supply and environment. Their current campaign focuses on engaging Kellogg’s to get GMOs out of their entire product line.

Institute for Responsible Technology (IRT) is a world leader in educating policy makers and the public about the documented risks of GM foods and crops, as well as the problems associated with current research, regulation, corporate practices, and reporting. IRT’s founder, Jeffrey M. Smith, is an international bestselling author, filmmaker, and the leading spokesperson on the health dangers of GMOs. He documents how the world’s most powerful Ag biotech companies bluff and mislead critics, and put the health of society at risk.

Label GMOs advocates for transparency in the food supply and for clear and concise labeling of genetically modified organisms.  They are the California grassroots network that helped to lay the groundwork for Proposition 37.  Label GMOs continues to educate in California and provide support for other on the ground grassroots GMO labeling efforts throughout the US.

Vani Hari is a management consultant, food activist writer and a two time elected North Carolina delegate, endorsed by President Obama. Vani started foodbabe.com in April 2011 to spread information about what is really in the American food supply. She teaches people how to make the right purchasing decisions at the grocery store, how to live an organic lifestyle, and how to travel healthfully around the world. The success in her writing and investigative work can be seen in the way food companies react to her uncanny ability to find and expose the truth. She been featured in the Washington Times, NY Times, Lawyers Weekly, Prevention.com, NBC – WCNC, ABC – WLOS, and profiled in Charlotte Observer.