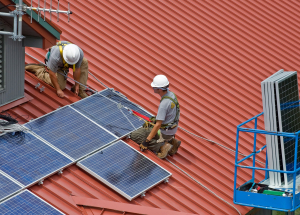 Wisconsin utility WE Energies recently proposed a hike in electricity rates on consumers, singling out residents who have opted to generate their own electricity through solar panels. The extra charge on residents who sell their excess power back to the grid has incited outrage at local and national levels. The utility claims the charges will cover the operating costs to the grid for customers with solar panels who aren’t paying the traditional rates, but all of the evidence surrounding the proposal suggests that this plan is little more than a reactionary measure from a company whose business model is in serious trouble.

The proposal would raise the fixed charge on all residents’ power bills from $9 to $16 per month, and impose an additional fee for those who sell their excess electricity back to the utility through a policy known as “net metering.” A Wisconsin solar installer stated, “The demand charge of $3.80 per kilowatt (kW) per month works out to about $220 per year for a 5 kW system, a deterrent for potential solar customers and an unfair penalty for those who have already chosen to go solar.”

A spokesperson for WE Energies said the company is seeking modest increases for the purpose of improving and modernizing their grid and complying with environmental standards. The company believes that it is unfair for those who generate their own electricity to use the grid without paying the same portion of the costs to maintain it as those without rooftop panels. In addition to this “demand charge,” the utility wanted to purchase excess power back from generators at a lower price than they currently pay. Punishing customers for installing rooftop panels and generating more power than they use is a big step in the opposite direction of a clean-energy future.

Homes with rooftop solar panels compose only a fraction of a percent (<1%) of WE Energies’ customer base, yet all of its customers would bear the burden of the rate increases. This raises serious questions about the legitimacy of the utility’s claims that energy generated from solar is eating away at their operating budget. Currently, WE Energies’ customers pay the second highest rates in the state of Wisconsin. Prices have increased 51% since 2005, and the utility’s parent company is currently in the process of a multi-billion dollar acquisition of another Chicago-based company. The evidence presented suggests that the proposal is an attempt to squash the solar industry’s growth rather than a legitimate concern over the utility’s operating costs. A recent testimony by an analyst from the WI Public Service Commission asserted that the short-term sales risk to the utility as a result of rooftop solar power generation was low, and that the company should open a more general investigation into the effects of solar on prices before proceeding.

Though this proposal is not likely to pass, the effects of successful policies that shove out solar could be dramatic. A future where traditional utilities and fossil-fuel-generated electricity dominate the market will certainly lead to negative environmental outcomes, including increased air pollution and a higher risk of climate-change-related events. On a level that resonates with people from both political parties, the move represents an attempt to take away the freedom to choose how the electricity you use is produced. Utilities are quickly realizing that their monopoly on household electricity is in jeopardy. Solar power is gaining momentum at an amazing rate in the US, and even anti-renewable policies such as the one proposed in Wisconsin, as well as similar proposals in Utah and actual policies in Oklahoma will do little to reverse the tide. To learn more about solar power and how you can become involved in shaping the world’s electricity future, please visit http://www.greenamerica.org/programs/climate/cleanenergy/solar.cfm.