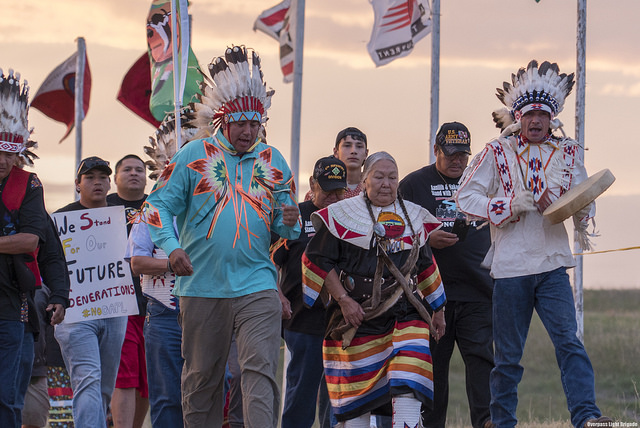 The Standing Rock water protectors and allies, including Green America, are celebrating a major victory: The Army Corps of Engineers has denied approval for the final permit that would have allowed the Dakota Access Pipeline (DAPL) to cross under North Dakota’s Lake Oahe, into the traditional territory of the Standing Rock Sioux.

Jo-Ellen Darcy, Assistant Secretary of the Army (Civil Works), whose office denied the permit, announced on December 4th that the Army plans to “explore alternative routes for the pipeline crossing … through an Environmental Impact Statement with full public input and analysis.”

A project of Energy Transfer Partners (ETP), the DAPL, when complete, would stretch 1, 172 miles from the Bakken oilfields of North Dakota, through South Dakota and Iowa, to Patoka, Illinois, carrying 570,000 barrels of crude oil per day. In addition to crossing traditional Sioux territory, this particular stretch of the pipeline would have lain half a mile from the Standing Rock reservation. Tribal members had expressed concern that a pipeline breach would be disastrous for both the Tribe and the millions of people whose drinking water would likely be affected.

While the Standing Rock Sioux, hundreds of US and Canadian Tribal Nations, and allies across the country view the Army’s move as a significant victory, the danger of the DAPL moving forward still casts a shadow over the Standing Rock reservation and the Sacred Stone water protectors’ camp at Lake Oahe.

“The decision will probably be reversed come January [when Trump takes office],” says Rebecca Adamson, an Indigenous economist and founder and president of First Peoples Worldwide, who has been working to mobilize institutional investors against the DAPL. Even if the pipeline is rerouted, it will still pose the same risks to the environment, the climate, and the millions of people who rely on drinking water sources along the DAPL route, she notes.

Indeed, ETP, which is spearheading the DAPL project, released a statement on December 4th lambasting the Army’s decision as “a purely political action.” The company said, “As stated all along, ETP and SXL [project partner Sunoco Logistics] are fully committed to ensuring that this vital project is brought to completion and fully expect to complete construction of the pipeline without any additional rerouting in and around Lake Oahe.”

With that threat in mind, the water protectors plan to remain at the Sacred Stones Camp indefinitely. But, as Adamson says, the current decision “is going to give everyone a much-needed cease-fire so people can regroup. They’re going to be safe for at least a solid month.”

“This is not just an amazing victory for Standing Rock and the Oceti Sakowin—but also for the many other Tribal Nations, grassroots Indigenous communities, and millions of Americans around the country who have stood in solidarity with us here in person, at rallies around the country, and through phone calls and letters. This is a victory for organizing, and it doesn’t stop now,” says Dallas Goldtooth, Keep It in the Ground organizer for the Indigenous Environmental Network. “We are asking our supporters to keep up the pressure, because while President Obama has granted us a victory today, that victory isn’t guaranteed in the next administration. More threats are likely in the year to come, and we cannot stop until this pipeline is completely and utterly defeated, and our water and climate are safe.”

Adamson, Goldtooth, and others at the forefront of the DAPL protests urge people to keep up the pressure on ETP and its pipeline partners, on the banks financing the DAPL, on North Dakota government officials, and on the incoming Trump administration, to help ensure that the DAPL is not just rerouted but halted entirely.

Green America included an article written by Rebecca Adamson on “Investing to Support Standing Rock” in our Winter 2016 Green American, and the economic actions included in that piece are still vital to keeping this pipeline from moving forward, says Alisa Gravitz, Green America’s president/CEO. Most critically, Green America urges all of our members to break up with the banks that support DAPL.

In addition, Green America’s Divest/Invest campaign encourages divesting from fossil fuels altogether and reinvesting in clean energy to help move forward a clean-energy future even without Washington’s cooperation come January, and that’s a future where no community is threatened by oil pipeline breaches.

“This is an important victory today for the courageous Native Peoples at Standing Rock and for everyone in America,” says Gravitz. “We’ll all need to stand strong to make sure there’s no reversal of this direction. So please continue to support the people at Standing Rock and divest from companies that are financially invested in the pipeline.”

As LaDonna Allard, director of the Sacred Stone Camp, says, “I was asked, ‘When do you consider this pipeline issue to be over?’ I said, when every pipe is out of the ground and the earth is repaired across the United States. I am not negotiating, I am not backing down. I must stand for our grandchildren and for the water.”