The Dakota Access Pipeline (DAPL) was approved last year by the Army Corps of Engineers. It will stretch 1,172 miles from the Bakken oilfields in North Dakota to to Patoka, Illinois and carry 570,000 barrels per day of crude to refineries across the U.S.

Those concerned with climate change and greenhouse gas emissions seek to block the DAPL as it encourages the extraction of fossil fuels and investment in fossil fuel infrastructure. However, climate activists are not the only group with a stake in blocking construction of the pipeline. It will run underneath the Missouri river, endangering both the ecosystems and communities that rely on the river as a water source, including the Standing Rock Sioux Reservation. Just like the Keystone XL pipeline, American Indians are taking the lead in opposing this new pipeline and asking all Americans to join in the opposition. 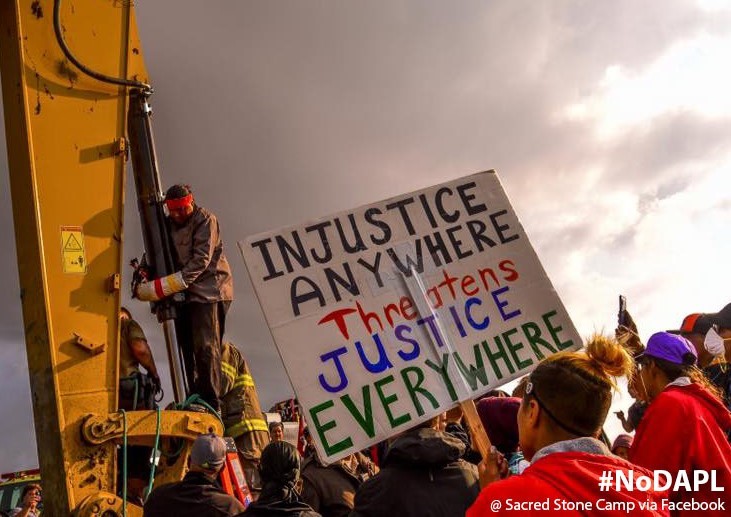 The tribe has sued the Army Corps of Engineers for failing to consult with them before approving the permits. In addition to the danger to the tribe’s main water source, the pipeline would also be built over areas considered sacred, including burial grounds. These areas are not officially part of the reservation, but belonged to the Sioux when the reservation was initially formed in 1868.

Since that time, much of the land has been illegally repossessed by the federal government, and in 1980, the Supreme Court ordered the U.S. government to compensate the Sioux. The tribes declined the payment and instead seek possession of the land slowly taken from them over the past century.

Construction of the pipeline continues. Over the holiday weekend earlier this month, Dakota Access bulldozers plowed a two-mile-long path through newly-discovered tribal burial ground. The sacred site was awaiting review by the state’s historic preservation office, but Dakota Access took advantage of the long weekend to continue construction in the area, and elsewhere.

Currently, thousands of protesters are gathered at the Red Warrior and Sacred Stone camps to continue the fight against the DAPL. The protesters, calling themselves “protectors” are composed of members of more than one hundred Native American tribes as well as climate activists from across the country. The protectors have been attacked by private security with pepper spray and dogs, and riot police are now making mass arrests of protectors, medics, and journalists in the area. Several reporters have also been arrested for simply covering the protests, a clear attempt at intimidating the media so that they will not bring attention to the pipeline and protests.

The protectors being arrested need to post bail, and those on the front lines are in need of supplies to continue to fight against the construction of the DAPL, which not only threatens the climate, but also the Standing Rock water supply and way of life. Green America will be supporting with a donation and we encourage others to do so.

Here are some ways to get involved:

2) Donate to the legal defense fund:

4) Call the White House at (202) 456-1111 and tell President Obama to rescind the Army Corps of Engineers’ permit for the Dakota Access Pipeline.  You can also sign the petition to the White House to Stop DAPL: https://petitions.whitehouse.gov/…/stop-construction…

5) Call North Dakota governor Jack Dalrymple at 701-328-2200. Please provide a succinct and respectful message stating that your reasons for opposing the pipeline and your concerns about the treatment of American Indians, protesters, and the intimidation of the media (including arresting reporters)..