Solar Industry Continues to Grow Faster than Anyone Imagined

Growth in the solar industry continues to surprise even the most optimistic supporters of the technology. In a world still dominated by fossil fuels, clean energy advocates have had a hard time describing the litany of benefits of a power source that doesn’t involve the combustion of hydrocarbons and the release of greenhouse gases. But now, according to a new report from Deutsche Bank, getting your electricity from the sun seems to be catching on across the world. The bank predicts that solar will reach grid parity with other sources of electricity in all 50 states by 2050. 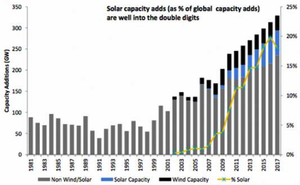 The investment tax credit for solar (ITC) plays a large roll in the plummeting costs of acquiring customers, financing and installing residential and commercial solar systems. The government offers a 30% credit for residential and commercial solar systems. Since the credit began in 2006, annual solar installation has grown by over 1,600%. The ITC is slated to drop to 10% in 2016, and is an important driver of the growth and cost reductions solar has enjoyed over the past decade. Though the clock is ticking for the ITC, Deutsche posits that the cost of financing will fall from 7-9% to 5.4% in 2015. It is unclear whether or not an expiration of the ITC will lead to a reversal of the recent growth observed. A ten-year extension of the credit at 30% would all but guarantee that the solar industry will continue its upward trend.

As fossil energy becomes more expensive relative to alternative sources and more people turn to the possibility of producing energy from the sun, new sources of mainstream funding should begin to find the solar industry. The fragmented, latticed network of installers, financiers and producers will begin to consolidate and drive growth even further. According to the International Energy Agency, more than half of the electricity generated in 2050 will likely come from solar. China represents the largest market for the growing solar industry, with the US coming in second. Other emerging markets such as India are stepping up with plans to invest heavily in solar energy in the coming years as well.

Falling oil prices are stirring concern that clean energy advancement is at risk, but oil is not a major generator of electricity and does not directly compete with solar power. Recent growth in the solar industry is unprecedented and does not appear to be at risk of slowing down in the near-term.

The transition to a solar-dominant electricity landscape is good news for the climate-minded. There are obvious emissions involved with the production, transport, and installation of panels, but the fact remains that solar represents a technology and not a fuel. Once in operation, a rooftop equipped with solar panels will produce emission-free electricity for its entire lifetime. The climate benefits of solar energy can only go as far as the industry can, and now is the right time to show your support. The Clean Energy Victory Bonds Act, sponsored in part by Green America, seeks to extend the ITC, along with several other key tax credits for renewable energy sources and energy efficiency updates for a ten-year period so that clean technologies can continue to compete and grow in the global energy marketplace. To learn more, please visit. www.cleanenergyvictorybonds.org.