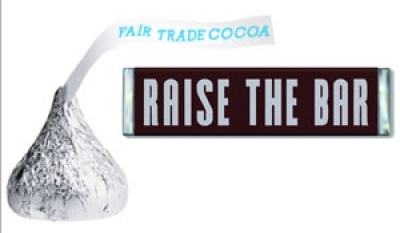 Green America and allies celebrated a victory as Hershey announced plans to certify its cocoa, following a long campaign to persuade the major chocolate manufacturer to follow the lead of peer companies and go Fair Trade.

The Raise the Bar, Hershey! Campaign welcomed the announcement from the Hershey Co. that it will be certifying 100 percent of its cocoa by 2020, and urged the chocolate giant to go 100 percent Fair Trade with incremental benchmarks. Hershey appeared to join its main rival Mars in announcing its target for certification with a 2020 deadline, but the company has not made any specific commitments yet to how they will pursue certification.

GBN members played a critical role in the campaign. Food coops and grocers stood up against Hershey, which influenced Whole Foods to drop Hershey products from their stores.

“The Raise the Bar, Hershey! campaign is pleased that Hershey is announcing 100 percent certification for its cocoa by 2020. To truly address child labor, Hershey needs to make sure it is certifying all of its cocoa Fair Trade, the only certification that adequately addresses the Worst Forms of Child Labor. Hershey should certify and label one of its top-selling, brand name bars Fair Trade within the next year, and should certify and label all of its chocolates Fair Trade by 2020. We urge Hershey to reveal how the company plans to get to 100% certification by disclosing the certifiers it will be working with as well as a timeline for converting specific product lines.

The Raise the Bar Hershey campaign, joined by over 150,000 consumers, union allies, religious groups, and over 40 food co-ops and natural grocers has been pressuring Hershey to address child labor for several years. Just this week, Whole Foods Market (WFM) announced that it was removing Hershey’s Scharffen Berger line from its shelves until Hershey took steps to address child labor in its supply chain. The Raise the Bar, Hershey Campaign! and its allies will continue to encourage Hershey, and other chocolate companies, to improve labor practices on cocoa farms and plantations.”

More about the campaign »