Going Forward: How We Can Build the Green Economy 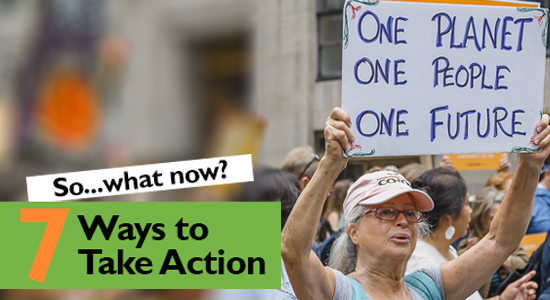 All over the United States, people are deeply concerned about what a Trump administration could mean for themselves, their families, and their communities, as well as the environment and vulnerable people worldwide. The news since the election gives cause for alarm.

President-elect Trump is planning to fill his cabinet with climate deniers, allies of big business, and anti-immigrant and anti-civil rights choices. He plans to undo US participation in the historic Paris climate accords, which just came into force this month.  He wants to end the Clean Power Plan that would shift the US away from dirty fossil fuels. He is in favor of reviving the coal industry, drilling offshore and on public lands, increased fracking, and reducing or eliminating the EPA. He also wants to undo Dodd-Frank regulation of the megabanks, which would allow them to engage in risky behavior again, and weaken the Consumer Financial Protection Bureau, which protects us all from predatory practices. He supports “law and order” and “stop and frisk,” which are the slogans and policies that lead to police abuses of people of color.  He infamously wants to deport millions of immigrants from the US, build a wall on the Mexican border, and is already talking about reducing rights for the nation’s LGBTQ community.

We have also made progress on the environment, particularly over the past 30 years, due to the endless resourcefulness of activists on the local, state, and national level.

We need to bring that energy to the next four years, to ensure that all the gains we’ve made as a nation are not lost, and to move forward on bold new initiatives wherever avenues are open to achieving them.  While most of the attention on the election focused on the national races, there were some very bright spots at the state and local level, including four states that passed increases to the minimum wage (positively impacting two million people). Massachusetts passed increased animal welfare protections.  An anti-solar initiative backed by utilities in Florida failed.  These successes can be built on in other states and pave the way for national successes in the future.

Green America will be working with all of our individual and business members to fight egregious policies at the national level, while working directly with consumers, businesses, and investors to continue to grow the green economy.  Our organization was founded during the Reagan Administration, a time of notable hostility to the environment and social justice, and we have worked tirelessly to create a green economy for all ever since. Here are just some of the ways to join us in protecting and advancing social justice and environmental sustainability that’s at the heart of that work:

The years ahead are going to be very challenging for us all, but if we all work together for the world we need and deserve, we can make progress.  We look forward to joining with our individual and business members and allies to protect the gains we’ve made and pioneer the innovations that will create a greener world for future generations.

Thanks to all the people who take action with us to create a greener world, and if you are not already a member of Green America, please consider joining us today.