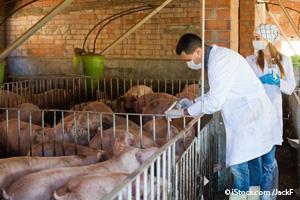 “The use of antibiotics is the single most important factor leading to antibiotic resistance around the world,” the U.S. Centers for Disease Control and Prevention (CDC) notes, explaining “simply using antibiotics creates resistance.”2

The drugs are one of the most commonly prescribed drugs in human medicine, and up to 50 percent of the time they’re prescribed when not needed or using incorrect dosing or duration, according to the CDC.

This is problematic, but it pales in comparison to the use of antibiotics in food animals, which is driving rates of antibiotic resistance sky high.

Eighty percent of the antibiotics used in the U.S. are used by industrial agriculture for purposes of growth promotion and preventing diseases that would otherwise make their concentrated animal feeding operations (CAFOs) unviable.

With animals packed into tight quarters, fed unnatural diets and living in filth, disease flourishes. Low doses of antibiotics are added to feed as a matter of course, not only to stave off inevitable infectious diseases but also because they cause the animals to grow faster on less food.

“But there is a terrifying downside to this practice,” Scientific American reported. “Antibiotics seem to be transforming innocent farm animals into disease factories.”3The antibiotics may kill most of the bacteria in the animal, but remaining resistant bacteria are allowed to survive and multiply.

It’s becoming clear, however, that the deadly resistant microbes may be spreading far easier and wider than has been previously realized. According to Scientific American:4

“Recent research shows that segments of DNA conferring drug resistance can jump between different species and strains of bacteria with disturbing ease, an alarming discovery. By simply driving behind chicken transport trucks, scientists collected drug-resistant microbes from the air within their cars.”

The industrial agriculture industry has denied that antibiotics usage in animals poses a direct risk to public health, and it’s difficult for researchers to prove the point, in part, because the industry makes it harder.

Under the guise of protecting the animals’ health, some CAFO farmers are instructed by their meat producer bosses to not allow researchers on the farms. In reality, they’re tying the hands of scientists, lest they produce the proverbial smoking gun that forces the lucrative practice of administering low-dose antibiotics to stop.

Dr. James Johnson, an infectious disease physician at the University of Minnesota, told Scientific American, “Frankly, it reminds me of the tobacco industry, the asbestos industry and the oil industry … We have a long history of industries subverting public health.”5

There has been some revealing research, even still. Methicillin-resistant Staphylococcus aureus (MRSA), which can cause deadly infections of the skin, blood and lungs, was first discovered in pigs and pig farm workers in the Netherlands in 2004.

Since then, this livestock MRSA strain has spread across Europe, Canada and the United States, causing both mild and life-threatening infections.

They also observed active infections caused by livestock-associated Staphylococcus aureus (LA-SA). Worse still, aerosolized MRSA has been detected in the air inside and downwind of a pig CAFO, as well as in animal feed.7

Also revealing, people who have close proximity to pig CAFOs and areas where CAFO pig manure is applied to crop fields are more likely to be infected with MRSA, adding to the “growing concern about the potential public health impacts of high-density livestock production.”8

The U.S. Food and Drug Administration (FDA) issued guidance on agricultural antibiotics on December 11, 2013, but it didn't go anywhere near far enough.

They asked drug companies to remove indications for “feed efficiency” and “weight gain” from the labels of their antibiotic products. They also require veterinarians to oversee any addition of these drugs to animal feed and water.

Most companies have agreed to comply with these voluntary guidelines and state they no longer use antibiotics for growth promotion purposes. Instead, they simply state they use the antibiotics for disease prevention and control, a use that is still allowed under the FDA’s guidance.

Carbapenem-resistant enterobacteriacea (CRE), bacteria resistant to the class of antibiotics called carbapenems,9 have now been detected in a U.S. pig farm.10 The finding surprised even the researchers, since carbapenem drugs are illegal to use in food-producing animals because of their importance to human medicine.

CRE has been dubbed a “nightmare bacteria” by the CDC’s Director Dr. Tom Frieden because of their extreme resilience — it’s nearly impossible to kill them with conventional antibiotics:11

CRE was found after researchers swabbed the floors and walls of the pig farm over a period of five months. A gene called bla IMP-27, which gives bacteria the ability to resist carbapenem antibiotics, was also detected.

The researchers suggested the bacteria may have been introduced to the farm from the outside and that other antibiotics used on the farm could be potentially contributing to its maintenance and spread.12 The researchers wrote:13

The emergence of [CRE] …  has been described as heralding the end of the antibiotic era with their global expansion presenting an urgent threat to public health.

… These potential pathogens can harbor highly mobile genes that confer resistance to the most critically important, live-saving antimicrobial drugs.”

Roy Kishony, Ph.D., a biologist at the Technion in Israel and a visiting professor at Harvard Medical School (HMS), and colleagues have built a giant petri dish called a Microbial Evolution and Growth Arena (MEGA) plate that shows what happens as bacteria become resistant to antibiotics.

The bacteria, shown in white in the video above, first fill in the areas where there is no antibiotic present but quickly a “mutant” appears that’s resistant to the antibiotic. HMS noted, “The experiments are thought to provide the first large-scale glimpse of the maneuvers of bacteria as they encounter increasingly higher doses of antibiotics and adapt to survive — and thrive — in them.”

In 2015, the federal Presidential Advisory Council on Combating Antibiotic-Resistant Bacteria was created. Part of its role is to evaluate the implementation of the National Strategy for Combating Antibiotic-Resistant Bacteria. One of the latter’s goals is to slow the emergence of resistant bacteria, which will require “judicious use” of the drugs.

According to the National Strategy, “Judicious use of antibiotics in healthcare and agricultural settings is essential to slow the emergence of resistance and extend the useful lifetime of effective antibiotics.”14

By 2020, the plan calls for the elimination of the use of medically important antibiotics for growth promotion in food-producing animals. It also calls for veterinary oversight for use of medically important antibiotics in the feed or water of food-producing animals. But is this going far — and fast — enough?

While CAFOs promote antibiotic-resistant disease, traditional farming practices combat it. At small, regenerative and diversified farms, where pigs, hens and cattle are raised together in a sustainable way, there are many reasons why disease is kept to a minimum, even without the use of antibiotics in animal feed.

The animals have more space to move around, for starters, making them hardier than those raised in confinement. They are weaned at a later age, which builds their immune systems. Even exposure to the sun, a natural sanitizer, is helpful, while a pig allowed to roll in mud enjoys a natural anti-parasitic. Scientific American further reported:15

“In a 2007 study, Texas Tech University researchers reported that pigs that had been raised outside had enhanced activity of bacteria-fighting immune cells called neutrophils when compared with animals raised inside.”

As the importance of combatting antibiotic-resistance disease grows ever stronger, you can do your part and help protect your health not only by using antibiotics responsibly but also by rethinking where you buy your food. Choosing food that comes from farms that do not feed low-dose antibiotics in animal feed is crucial.

While avoiding CAFO meats, look for antibiotic-free alternatives raised by organic and regenerative farmers. If you live in the U.S., the following organizations can help you locate these types of healthy farm-fresh foods: