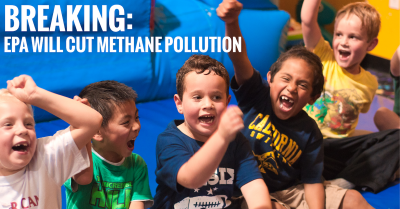 Today, the EPA published its final rule regarding methane leaks from new, modified, and reconstructed oil and gas sources.  This is an important step forward for the US, especially in light of our climate commitments from the Paris Agreement.  Thanks to the thousands of Green America individual and business members that took action to support the rule. The rule is a long-time coming and very necessary.  Huge amounts of dangerous methane and toxic air pollution are leaking from oil and gas industry sources, and it was recently announced that those leaks are 34% worse than previously reported. Increased methane leaks may be undermining the progress that the US has made in reducing CO2 emissions over the past decade. Methane pollution represents one of the most significant threats to Americans’ air, environment and public health.

Green America applauds the EPA for the steps it is taking to regulate methane emissions from new oil and gas sources, and urges the EPA to now address methane leaks from existing sources.